The Lents neighborhood is located in East Portland. It is bordered by the Brentwood-Darlington, Mount Scott, Foster-Powell, Powellhurst-Gilbert, and Pleasant Valley neighborhoods. This area is up-and-coming and one of the new hotspots in Portland. 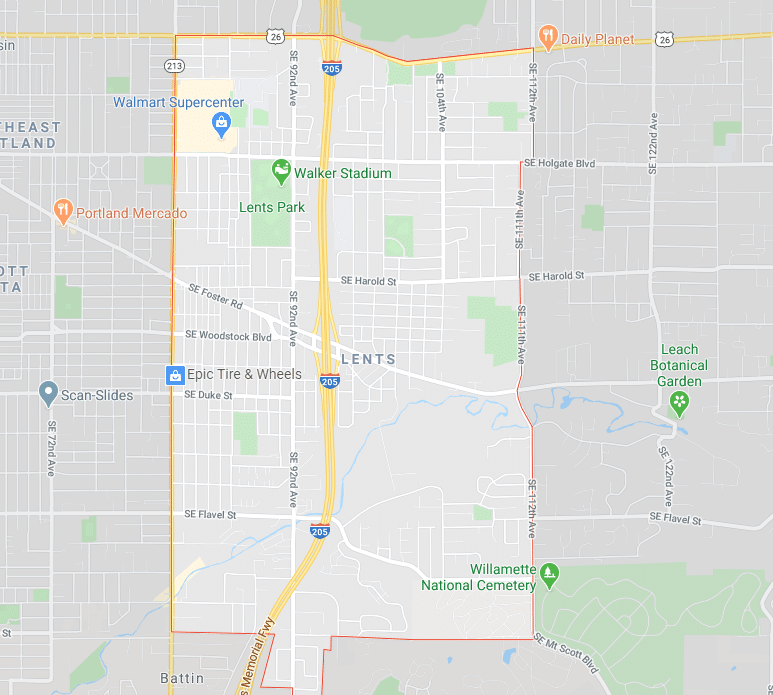 Click the image for a searchable Lents Neighborhood Map including all homes for sale.

Features of the Lents Neighborhood

Lents is an East Portland neighborhood with a nice mix of residential communities. Lents is close to major roadways for plenty of access to shopping and other amenities, as well as an easy commute. The new Tri-Met Green Line makes this neighborhood even more accessible. On the light rail, Lents is about a 30 to 40-minute commute to downtown and a 15-minute commute to Clackamas Town Center. Neighborhood parks like Lents and Glenwood are popular places for families and community activities. Neighbors enjoy bike rides along the I-205 MUP (AKA the Woody Guthrie Trail), and enjoy harvest season at Zenger Farm. 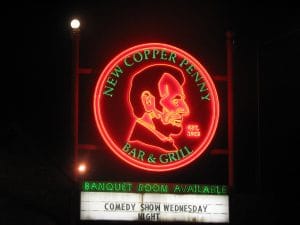 Longtime residents of the Lents neighborhood will likely remember the New Copper Penny. However, depending on your exposure to it, you might have fond or not-so-fond memories of the restaurant and venue space. Before it was torn down in 2016, the Penny was something of a hotbed of criminal activity and seedy individuals. However, when it first opened in 1972, it was the realization of a long-time dream.

The owner of the New Copper Penny was a man named Saki Tzantarmas. Originally, the place was a pub called the Copper Penny. Tzantarmas added “new” to the title and fixed up the run-down building. According to the story that was on the menu, the name referenced Tzantarmas’ arrival to America with only five pennies in his pocket.

Over the years, the New Copper Penny grew until it encompassed a full city block. Its neon light became an icon for Portlanders, bringing them to the restaurant, bar, off-track horse betting, and dance pavilion. Each of these sections used to be something else. The restaurant was originally a doctor’s office, while the dance hall was once a hardware store.

Today, the property is home to a massive apartment building with a Planet Fitness on the ground floor. There are no remnants of the New Copper Penny anywhere, meaning that eventually, its memory will fade.

Walker Stadium – Home of the Pickles and Portland Baseball 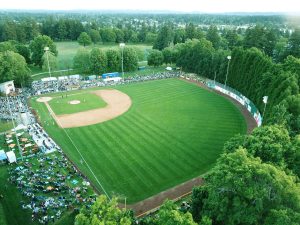 As much as some people have tried in the past, Portland has just never been much of a baseball town. For a while, the Portland Beavers played at Providence Park (then PGE Park), but attendance was spotty at best, and the team moved away permanently in 2010. However, baseball fans don’t have to petition the mayor or city council to bring a new team back, since the Portland Pickles, and the Wild Wild West League is now going strong.

You won’t find the Wild Wild West League (WWWL) outside of Portland, meaning that it’s comprised of local teams, mostly college-level. The Portland Pickles practice and play at Walker Stadium, which is on the north side of Lents Park. Since the league is still so new, we’re unsure how it will reverberate throughout the city, but the tongue-in-cheek approach may be wacky enough to work. You can check out more about Walker Stadium and the Pickles in the link below.

Since this area is up-and-coming, more and more restaurants and boutiques are calling Lents home. Most businesses can be found along the major thoroughfares, including Powell Blvd., 82nd Ave., and Foster Road. Outside of these streets, most of Lents is residential, thanks in part to the massive apartment buildings that have sprung up around Oliver Station. The addition of a new Max Line is helping foster growth in the area, so be sure to pay attention to Lents’ revival in the coming years. Here are some places to check out right now. 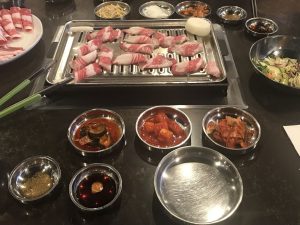 If you’ve never had Korean barbecue before, we highly recommend trying it at least once. There are a few places in Portland, and most of them are on the east side (around the Jade District). K-Town is one of the best options, thanks to its low-key atmosphere and excellent food choices.

For the uninitiated, Korean barbecue is an all-you-can-eat affair, and it’s best enjoyed with friends or family. You can pick from a wide array of meats, including beef bulgogi, pork belly, teriyaki chicken, and brisket. You cook your meat over a giant stove in the middle of the table, and each meal comes with a selection of sides. If you’re coming to K-Town, we recommend arriving during happy hour, which occurs daily between one and five pm. Meals are cheaper, although the selection is more limited.

Overall, K-Town is an excellent place to celebrate special occasions or for a night on the town. Once you’ve had the experience, you’ll want to come back for more. 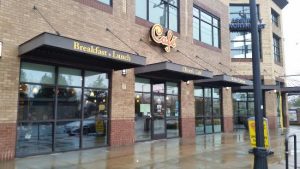 We find that most people tend to fall into one of two categories: night owls or early birds. Those on the latter end of the spectrum will appreciate Oliver’s Cafe, which specializes in breakfast and brunch. The place is only open from 8 am to 3 pm, so night owls will likely miss out on this delicious, from-scratch food.

Although Oliver’s Cafe seems like a new addition, it’s actually been around since 2012, meaning that it has experienced the revival of Oliver Station. Developers aimed for a semi-European vibe, with apartments up top and shops on the bottom floor. In that regard, Oliver’s fits right in, thanks to its dedication to fresh, local ingredients. You can tell that the chefs take pride in their work, making each dish stand out.

Since Oliver’s is focused on breakfast, we highly recommend sampling their omelets or skillets. The place also serves a delectable smoked brisket hash, which is perfect after a night on the town. The stuffed french toast is also a treat for those who have more of a sweet tooth. Beyond breakfast, Oliver’s also specializes in handcrafted burgers, including one made from black beans for the vegetarians. Another highlight is the coconut shrimp basket, which is one of the best we’ve had anywhere. 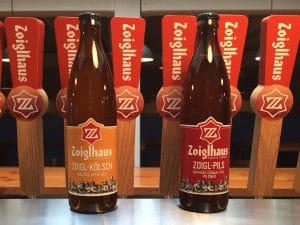 At first glance, the name of this brewery might seem like a generic German name, but it comes with a lot of history behind it. Zoigl is actually a type of communal brewing, where brewers will share ingredients and materials to craft their beers. So, a place like Zoiglhaus is dedicated to this tradition by offering space for local brewers to strut their stuff. This also means that the tap is always rotating, and you can develop a relationship with each brewer individually.

Since breweries are required by law to serve food, Zoiglhaus also offers various German staples, including bratwurst, jager schnitzel, fondue, and Bavarian pretzels. If you’re feeling saucy, we might recommend the fried pickles with ranch. Depending on the type of beer you get, this dish can complement it quite nicely. Zoiglhaus also serves burgers, salads, and a delicious Reuben sandwich if you want to go full Deutschland. 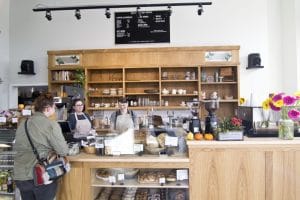 There are plenty of bakeries in Portland, but not all of them have an Italian twist. Bella’s was founded in 2015, although the bakery was just a stand in the Lents Farmer’s Market. However, the delicious pastries and bread were such a hit that the owner and head chef, Michelle Vernier had to move into a brick and mortar location.

Since then, Bella’s has become more than a bakery, offering hot food and grocery items. Visitors can come in for a range of Italian treats, including cannoli, amaretti, almond cake, biscotti, and ciambella (similar to coffee cake). The place also sells high-quality cheeses, olives, butter, eggs, and various spices. The whole place is run by Michelle and her daughters, giving the bakery an even warmer and more inviting atmosphere. In that regard, Bella’s is more than a bakery, it’s an experience.

In music, a mash-up is when two songs are blended together to make something fresh and unique. Flipside is the culinary equivalent of a mash-up, as it combines two things that most Portlanders love: beer and food carts. Although this place has only been around since 2018, it’s quickly become a hotspot in the neighborhood, thanks to its collection of high-quality drafts and food options.

Part of what makes Flipside such a treat is that it features dishes from around the world. There’s a Jamaican food cart, Mexican, Thai, and Japanese. For local favorites, you can choose between mouthwatering barbecue, mac n’ cheese, or a classic fish and chips combo. With eight different carts available, you’ll want to come back again and again to try something new. Or, you can come with a big group of friends and sample from each other’s plates.

Parks in the Lents Neighborhood

This area is family-friendly, with a great mix of suburban and urban areas. Since the neighborhood has been coming up in recent years, it has transformed into a chic part of town. Where there was once run-down buildings and empty lots, there are now trendy boutiques, restaurants, and apartment buildings. For those living on the east side, Lents is quickly becoming the new center of town.

Because Lents is in east Portland, it has a diverse mix of properties. Some are single-story ranch and bungalow-style homes, while others are massive multi-story structures. Most houses in the area come with a yard, although the lots can be stacked on top of each other. The residential parts of Lents are quiet and family-oriented, thanks in part to the various schools and parks around the area.