Lloyd  is located on the Eastside of the river close-in to Central Portland. It is bordered by the Eliot, Irvington, Sullivan’s Gulch, and Kerns neighborhoods, and the Willamette River. 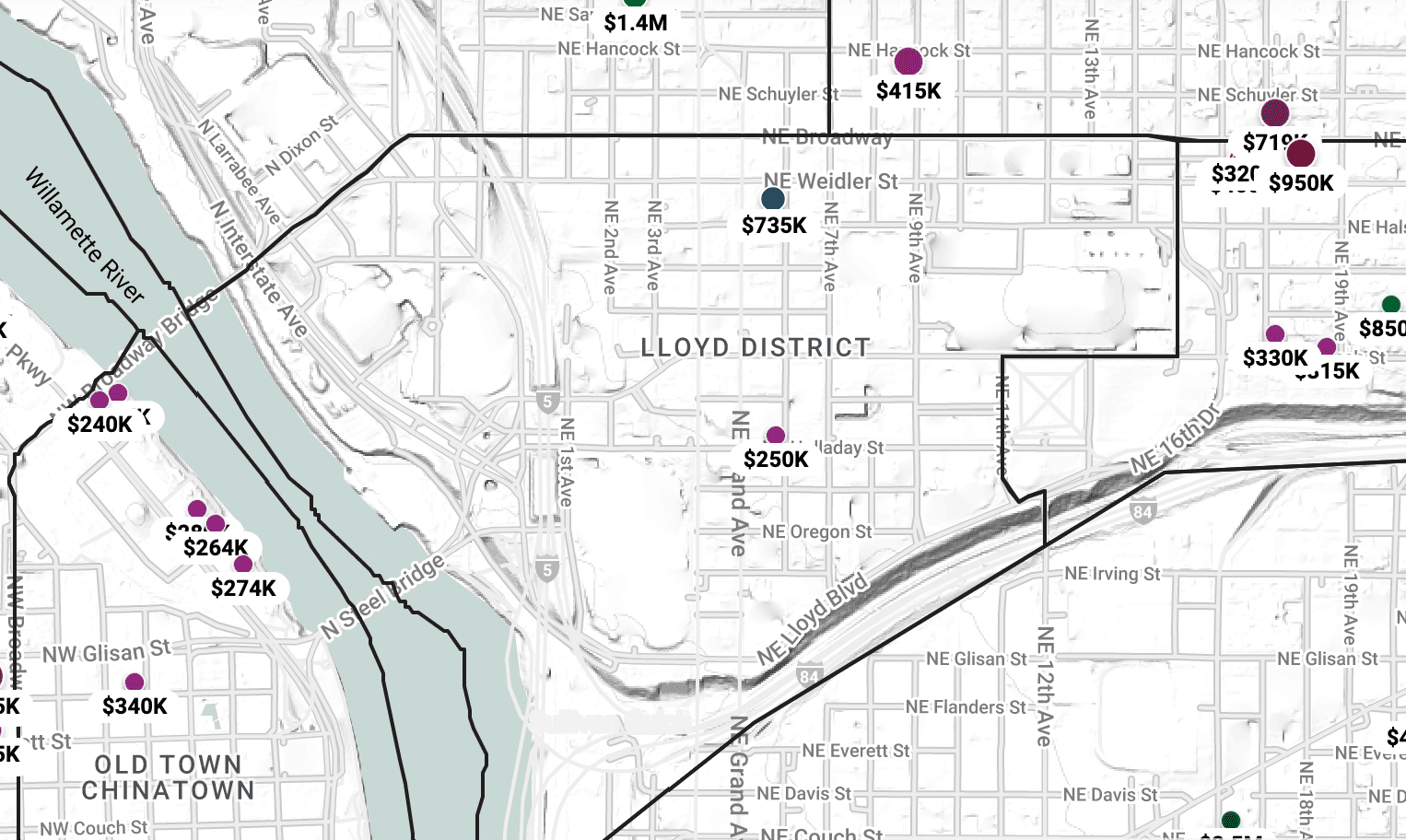 Click the image for fully searchable a Lloyd neighborhood map, including all homes for sale.

Perhaps one of the more unique neighborhoods precisely because it isn’t, the Lloyd District is Portland’s version of the rest of Americas home away from home. In other words, this relatively smaller neighborhood forms the epicenter of tourism in Portland. In Lloyd, there appear to be more hotels than homes, and recognizable seems to be the aesthetic mandate. Essentially, this is where you’ll find the Denny’s.

That is not to say that Lloyd is without its charms, its character, or it’s ‘Pure Portland’ feel, and we have tried to list a few below. In a neighborhood of visitors, these are the businesses we think make the nicest introductions.

Since banners typically wave in an eye-catching invitation to step closer, an entire store of them plus flags, plus kites simply does not let you walk past without entering. 11,000 square feet of showroom and warehouse space, including room for their own sewing and repair, Elmer’s Flag Banner, Kites Too! offers the largest selection of flags in the entire world, most of them onsite: international, American, American historical, military, sports, nautical, fun. Their banner selection likewise runs from animals to landscapes to floral to seasonal. The Kites Too! side of the business is also amped, featuring single line kites, stunt kites, traction kites, themed kites.

Family owned and operated, Elmer’s Flag & Banner, Kites Too! does business all over the world out of their only location this must stop, dazzling gem in Portland’s Lloyd District.

Making lemonade from lemons, local jewelry design artist, Jane McLellan, began her beloved jewelry business during dot.com layoffs that forced her to re-org her life. In seven years, that lemonade has been sweetened with international recognition, celebrity clientele, and spotlights in top fashion magazines. In addition to Jane’s artful jewelry, the business carries vintage cowboy boots, local leather, and a line of denim.

Providing Asian foods and imports in the Lloyd District since 1968, Anzen and third generation owner, Hiroshi Matsushima, actually offer much, much more. First of all, the store is deceptively huge, supplying Portland with a full-on Asian grocery market complete with fresh seafood and meat as well as a comprehensive import store carrying everything from paper lanterns to sushi dishes to Japanese prophylactics.

More than a line of products, however, Hiroshi’s Anzen imparts friendship and good cheer, with many customers addressing Hiroshi by name as they enter and engaging in easygoing conversation. But, yet, the importance of this store runs profoundly deeper.

Photographs on the wall tell the tale of a family-owned shop that obviously goes back a lot further than 1968. And then a large notice, framed and hung prominently presumably so that no one ever forgets, begins to explain the discrepancy. Within the sizeable frame is the decree that sent over 100,000 American citizens of Japanese descent into internment camps during World War II and suspended the Matsushima family’s business from 1942 to 1946. Before then and dating back all the way to 1905, the shop was located in what was then known as Japantown. Following the blight of the political action taken during the war, those same exact streets on Portland’s northwest side converted and became forever known as Chinatown.

But Hiroshi remembers and celebrates another time, not only when the political geography of Portland was different, but when proprietors were your trusted friends, and their products reflected relationships more than just revenue.

Not quite a box, the 300 square foot sales area of Hot Box Betty is, lets just say, cozy. But size only matters when it comes to fit, and they manage to chock the place full of fashion favorites in a variety of sizes in a shop that, amazingly, doesn’t feel cramped or crazy. They carry accessories as well, and deals are to be found.

We normally don’t do chains, but Segafredo Zanetti Espresso Café has over 600 locations worldwide and only four in America, of which the Portland site is one, in such company as Cairo, Amsterdam, and Paris. Guess word’s gotten out we like our coffee.

Offering salt rubs to sugar glow to massage and hydrotherapy, la Muse is a spa retreat as well as gift gallery.

The prized, enormous Rose Quarter complex is located in the heart of Portland’s Lloyd District and is comprised of the 12,000 seat Memorial Coliseum, the 6,500 seat Theater of the Clouds, the 40,000 square foot Exhibit Hall, and the Rose Quarter Commons. Finally, the Rose Garden Arena is Portland’s largest indoor venue at 19,980 seats, and it is home to the NBA’s Portland Trail Blazers, the Western Hockey League’s Winter Hawks, and the National Lacrosse League’s Portland LumberJax as well as many major other indoor events and concerts.

When home during their respective seasons, each of these three professional teams often plays on Saturdays, with typical starts times around 7:00-7:30. The Trail Blazer’s www.nba.com/blazers) schedule runs from October to April. The Winter Hawks (Front Office: Memorial Coliseum, 300 N. Winning Way www.winterhawks.com) play from September to March. And the LumberJax (One Center Court, Suite 150; ; www.portlandjax.com) swing away from December to April.

Portland itself scored two major points for local sports in 2007. The slam-dunk was beating the odds to nab the 2007 number one pick in the NBA draft. The Trail Blazers chose outstanding Ohio State center, Greg Oden. History is waiting to be made, and the glory of the 77 championship lead by the likes of Bill Walton and Maurice Lucas is waiting to be restored.

In 1976, Portland became the first American city to host a team in the Western Hockey League, which itself is part of the Canadian Major Junior Hockey League and the number one go to source for America’s National Hockey League recruiting. In their thirty-plus years of hitting the ice, the Winter Hawks have racked up numerous pennants and playoff championships and have managed to skate home with the Memorial Cup twice.

In 2005 at the age of 24, Angela Batinovich became the youngest owner of a professional sports team in the US. Arriving on the scene with a background in fashion and her own designer label, Bats Daughter, no one knew exactly what to expect from her brand new lacrosse team, The LumberJax. One year and a few really smart moves later, Angela was named the 2006 National Lacrosse League Executive of the Year.

First, Angela hired a top-notch coach, and then, understanding that not everyone is familiar with the game of lacrosse, she pimped the experience by pumping in loud music and ramping up the atmosphere to that of a stadium party, thus ensuring a good time regardless of spectator experience.

The 17-acre campus hosts the largest convention center in the Pacific Northwest with two grand ballrooms, 50 meeting rooms, and 250,000 square feet of exhibit space. As if a flagship for the green tide in Portland, the OCC is the first convention center in America to receive the U.S. Green Building Council’s LEED certification as an existing building. A one-stop-does-it-all affair, the Oregon Convention Center provides services from audiovisual, lighting, and electrical concerns while youre there to booth cleaning after you’re gone to pole banner advertising before you ever arrive. And they are handily equipped to handle events for 10 to 10,000.

PortlandNeighborhood would be remiss to mention the Lloyd District and not make reference to the Lloyd Center Mall. Belonging to the Glimcher Company, based out of Columbus, Ohio, Lloyd Center will not disorient the out-of-town visitor to be sure, which is doubtless why its location works so well. But features like Stanford’s Restaurant and Bar, owned by the Portland based Pacific Coast Restaurants’ family of businesses give a shout out to at least the idea of local while the concourse’s gigantic ice skating rink is a more sensational reminder of bygone social spaces and promenades than the typical mall offerings of children’s play area/germ fests and faux foliage.