The Madison South neighborhood is located in Northeast Portland. It is bordered by the Roseway, Sumner, Parkrose Heights, Hazelwood, Montavilla, and Rose City Park neighborhoods.

Click on the image for a searchable Madison South neighborhood map, including all homes for sale.

Features of the Madison South Neighborhood

As one of the larger neighborhoods in Northeast Portland, Madison South has a lot of space to explore. Much of it is wide-open and green, thanks to the Rose City Golf Course, Rocky Butte Lookout, and the Grotto, all within its borders. Residents who appreciate the natural beauty of Portland will love Madison South.

Although this spot is now one of the premier golf courses in Portland, Rose City Golf Course was originally a racetrack. The land was developed back in 1910 and was called the Rose City Raceway. The track was used for motor events, but they didn’t seem to draw much of a crowd.

By 1921, the track had its final event – a staged railway collision. Shortly after, a local resident named A. H. Gould and his friends converted the land into a makeshift golf course. They petitioned the city to turn it into an official club, and construction started the following year.

By 1923, Rose City Golf Club officially opened and was already setting attendance records by 1928. In 1932, the clubhouse was built, and the Rose City Grill came in during renovations in the 60s and 70s.

Today, Rose City Golf Course is home to multiple tournaments, including the Rose City Iceberg Open, which takes place on New Year’s Day, and the Portland City Best Ball, which started in 1952. 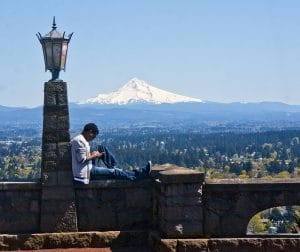 Living in Portland means that you get to appreciate plenty of green spaces and lush scenery. However, if you want some excellent views of the city, we highly recommend taking a drive to Rocky Butte. This is the highest point on the Eastside, and it is well worth a trip.

While heading up the hill, you’ll notice plenty of exquisite homes, each with their own picturesque view. Depending on the side of the butte they’re on, they can either see Mount Hood, the Columbia River, or Downtown Portland. Fortunately, once you reach the top, you can see it all.

The park is much flatter than you might expect, and it has lampposts and rock walls along its border. Unlike other Portland Public Parks, this area has no structures or coverings, so you are exposed to the elements.

Rocky Butte covers almost 2.5 acres, and it has trails and two rock walls for climbing enthusiasts. The spot is also open until midnight for much of the year, so you can get some incredible views of Portland at night. Overall, one of the best parks in the city. 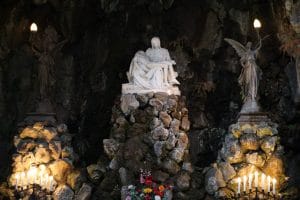 When talking about gorgeous scenery in Portland, the Grotto has to be near the top of the list. This National Sanctuary carved into a cliffside is one of the most pristine and serene locations in the city, making it a haven for visitors of all faiths and backgrounds.

The Grotto started out as a rock quarry at the turn of the 20th century, and the land was owned by the Union Pacific Railroad. A young pastor named Ambrose Mayer came upon the site in 1923 and marveled at its rugged beauty. At the time, the plot was about to be sold for residential development, but Ambrose was able to convince the city to sell it to the church.

Construction began in September of that year, carving the now-famous shrine into the rock. By May of 1924, the first mass was held there, which had 3,000 people in attendance.

These days, The Grotto receives thousands of visitors per year, mostly for its Christmas at the Grotto celebration. However, no matter when you visit, be sure to take a tour of the grounds to see the various gardens and sculptures. A sanctuary, indeed.

Because this neighborhood has so much open space, there are not many businesses. Those that are here are mostly along 82nd Avenue, which cuts through the center of Madison South. Beyond the golf course, Grotto, and Rocky Butte, be sure to check out these gems. 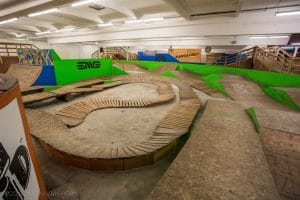 It’s no secret that Portland is a biking town. Everywhere you go, there are bike paths, rails to hook up your ride, and bike-friendly trails. Unfortunately, Portland weather can often conspire against cyclists, with only the most hardcore riders braving the cold and the wet.

Thankfully, bikers of all ages and skill levels can still enjoy riding at Lumber Yard. Inside this indoor playground is a series of ramps and trails that allow bikers to get the full riding experience. Test your skills by doing tricks or do a few laps around the track.

Part of what makes Lumber Yard so enjoyable is that it hosts classes and camps for bikers of different ages. It’s the perfect place for kids and adults to learn how to ride and have fun while doing so. Become a member and you can enjoy Lumber Yard whenever you like. Best of all, they have a Pizza Schmizza on the premises, so feel free to work up an appetite.

No matter where you live in Portland, it’s not a real neighborhood unless it has its own local watering hole. While some areas have tons of bars and taphouses to choose from, Madison South residents have the Eastside Bar and Grill.

The most notable aspect of Eastside is that it hosts local music acts regularly. So, if you love to jam while sipping on a pint, here is the place to be. So few bars and venues in Portland are showing live music (affordably, at least), so it’s nice to know that this Bar and Grill is holding it down.

As far as the food goes, it is the standard pub fare, including burgers, fries, wings, and more. 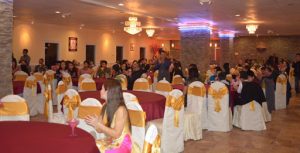 If you enjoy Pho, you likely know that Portland has tons of Pho restaurants around. Since Madison South is close to the Jade District, is is home to many Asian eateries, including Pho Oregon.

What makes this spot notable is its traditional Vietnamese vibe and banquet hall. This is an excellent place to host events, thanks to its generous size and delicious catering options.

Beyond Pho, this restaurant also has a Vietnamese bakery, called the Lanvin French Bakery. Once you’ve finished your delicious noodles, be sure to buy a tasty treat for the drive home.

When looking at Madison South on the map, you’ll notice that there is a large swath of green space tucked between I-205 and I-84. Because of its location, the land has gone undeveloped for decades – until now.

Gateway Green is an ambitious new project from the City of Portland, which aims to transform this patch of nothing into a vibrant city park. While it is currently under construction, the city hopes it will become a haven for nature-lovers and bikers. With 25 acres at their disposal, Gateway Green could become one of the largest city parks ever.

Being on Portland’s eastside, Madison South is a mix of both old and New Portland. Thankfully, because of its green spaces, this neighborhood is quiet and relaxed, with a welcoming atmosphere. Although many of the buildings and businesses are older, there have been recent developments to bring Madison South into the new era.

Depending on where you are looking within this neighborhood, the homes can be simple one-story structures or magnificent mini-mansions. Those along Rocky Butte are the crown jewel of the area, meaning that you get the best that Portland has to offer. As with most areas of the city, the homes are a blend of Craftsman, ranch-style, and bungalow.