The Parkrose Heights neighborhood is in northeast Portland. It is surrounded by the Madison South, Parkrose, Argay Terrace, Russell, and Hazelwood neighborhoods

Features of the Parkrose Heights Neighborhood

Because Parkrose Heights is so small, it is not as active and vibrant as other neighborhoods in northeast Portland. Most of the area is residential, although Halsey street on the southern border is where you can find most of the action.

Thanks to its abundance of homes and residential streets, Parkrose Heights is mostly quiet. However, since it is bordered on two sides by highways (I-205 and I-84), the area can get a bit noisy as you approach the edge. That being said, such proximity to major thoroughfares ensures that Parkrose Heights residents can get anywhere in Portland relatively fast.

Technically speaking, much of this district is located in the Hazelwood neighborhood, which is to the South of Parkrose Heights. However, some of it does spill into the Heights, and the city is planning new developments in the coming years.

Back in 1950, business owners in the neighborhood formed the Gateway Area Business Association, which was originally called the Woodland Park Merchants. At the time, it had only 15 members, but today, there are over 50 active participants.

The goal of the GABA is to help small businesses thrive by promoting their products and services. The Association also works as a bloc to facilitate changes that encourage development. Over the years, the Gateway District has been redone, and the future is looking bright for the area as it continues its expansion.

As we mentioned, the vast majority of restaurants, bars, and shops are located along Halsey Street on the neighborhood’s southern border. Since this area is so close to the Gateway District and several shopping malls, there is plenty to do and see (and eat) while visiting. Here are the places we recommend the most. 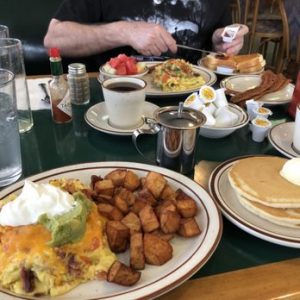 If you’re a breakfast lover, then you will want to eat like a king at King’s Omelets. This unassuming restaurant in the Gateway District is home to some of the best egg dishes in the city. As the name suggests, here is where you come to get a world-class omelet, although they do serve other dishes as well.

When it comes to omelets, you can get virtually any combination of textures and flavors. Highlights from the menu include the Pacific omelet (with shrimp), the California omelet (with avocado), the Nevada omelet (with turkey and swiss), and the Hawaiian omelet (with pineapple). Don’t worry, not all of them are named after places, although we would be remiss without mentioning the most famous of them all, the Denver omelet.

Beyond eggs, King’s offers standard diner fare, including burgers, sandwiches, steaks, chicken, and more. However, if you’re going to visit, why would you try anything else? 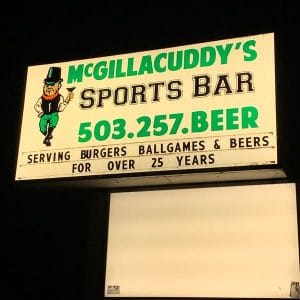 One of the golden rules of Portland is that you are never too far from a bar or taphouse. With the highest number of breweries per capita in the world, it makes sense that Portlanders would have more than their fair share of watering holes. If you stroll down Halsey Street, you’ll notice three in rapid succession – Clamity Jae’s (no, that’s not misspelled), 108 Bar N Grill, and then McGillacuddy’s. Since this place is the most eccentric of the three, we decided to include it here.

As the name would suggest, this bar has a noticeably Irish flair to it. Despite the misspelled name (spellcheck insists it should be McGillicuddy’s with an I), this place is the real McCoy. Since 1994, the bar has been a home to sports fans, beer lovers, and gourmands.

While you might assume that McGillacuddy’s is best for dinner, you would be wrong. On Saturday and Sunday, you can partake in an all-you-can-eat breakfast, complete with bacon, eggs, potatoes, pancakes, and more. Best of all, it’s all yours for just $9.

If breakfast isn’t your bag, feel free to dine on one of the bar’s signature burgers. Since this place is next door to Food Fight (see below), it serves an all-vegan version so that you can eat with no regrets. Overall, as far as local bars go, McGillacuddy’s is a cut above the rest. 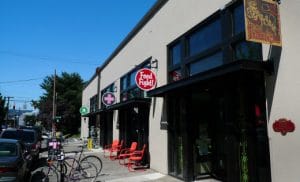 Beyond beer, Portland is home to a smattering of vegan eateries. Whether you are a full vegan or just want to eat healthily, you have tons of options available, no matter where you are in the city.

However, while eating at a vegan restaurant is great, what about when you want to snack? Or, what if you want to save money by cooking vegan dishes at home? Fortunately, there’s Food Fight!

This grocery store started in 2003, well before the vegan craze took over the city, and it has expanded to a second location on Stark St. The goal of Food Fight is to provide healthy vegan treats to all. The commitment is real, as every product on the shelves is 100% free of any animal products or byproducts. You can’t even get honey, so don’t ask.

What helps separate Food Fight from other vegan-friendly stores is that they offer tons of fun and unique options. Being vegan typically means having to limit your diet, but here you’ll find tons of snacks and treats that you won’t find anywhere else. They even have vegan dog food! Overall, this place is a Mecca for Portlanders, and it’s easy to see why it has been so successful over the years. 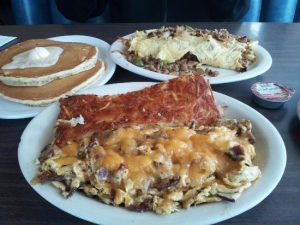 It may not be obvious at first glance, but Portlanders take breakfast seriously. While King’s Omelets is an excellent place to dine on some eggs, Gateway Breakfast House is the premier destination for all things breakfast-related. Although the outside may not look too chic or fancy, the food is good enough to draw a former president – Barack Obama ate here during his second term. So, you could say that the menu is “presidential.”

Speaking of the menu, despite Gateway’s name, they do serve more than breakfast. If you’re hungry later in the day, you can browse the lunch menu as well. That being said, they do close at 2 pm, so plan accordingly.

Gateway Breakfast House doesn’t skimp on portions – everything is fully loaded and sure to leave you satisfied. The menu reads like a classic 50’s joint, complete with signature items like rib-eye steak and eggs, German sausage and eggs, cinnamon French toast, and chicken-fried steak. You can also get scrambles and omelets if you’re feeling extra saucy.

Parkrose Heights is relatively average for northeast Portland. Once you get outside of the hustle and bustle of the Gateway District, the neighborhood is quiet and serene. Some parts are nicer than others, but the whole area is experiencing the New Portland wave. It’s only a matter of time before Parkrose Heights becomes the epicenter of new developments and construction.

Homes in this area are mostly original constructions, with many single-story and ranch-style properties. Since the neighborhood is small and relatively underdeveloped, home prices here are far more affordable than in other parts of Portland. Act fast before they get higher.