The Piedmont neighborhood is the ideal urban village boasting easy access to other popular Portland neighborhoods such as Humboldt, Alberta, Arbor Lodge, Boise, Eliot, and Kenton to name a few. Piedmont runs alongside the Max light rail train allowing for convenient commuting to downtown Portland and other Portland neighborhoods. Downtown by car is less than five minutes in most traffic situations and by bike is about twenty-five minutes. I-5 is easily accessed as it runs directly alongside Piedmont. 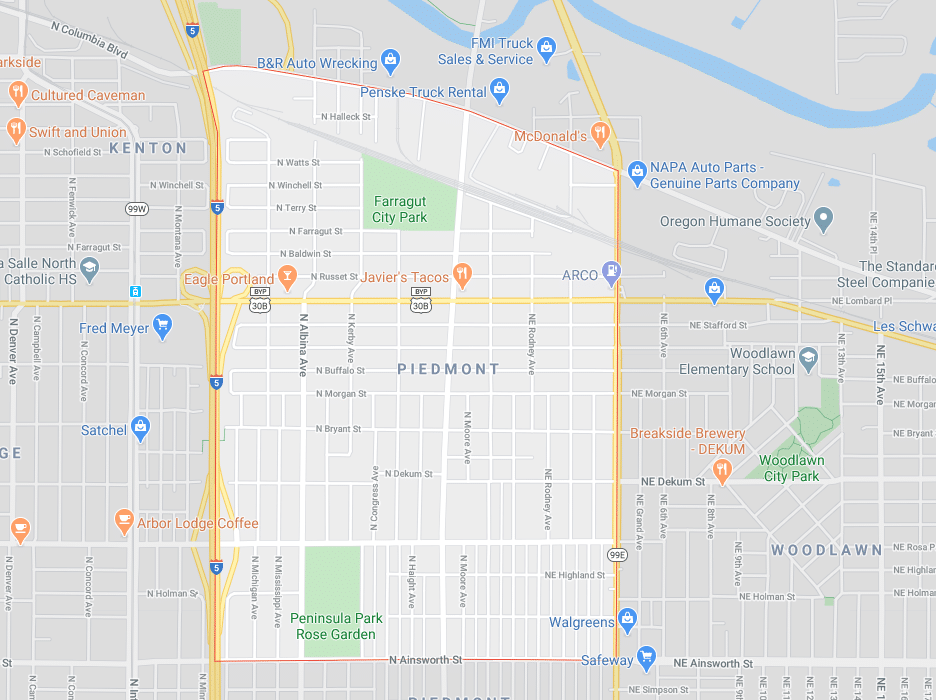 Click the image for a Piedmont neighborhood map including all homes for sale.

Back in the 1920s, Piedmont was one of the original suburbs of Portland but is definitely not considered one today. As a result of the Portland real estate market boom, Piedmont has seen an influx of new residents to the area which has helped to create the strong community present today. As one might imagine, Piedmont has some wonderful areas with beautifully improved homes and neighborhoods, with some still in transition.

Piedmont locals enjoy easy access to New Seasons Market, what seems like their own private light rail (the Max), a half dozen coffee shops, and a slew of other independent businesses and restaurants in Piedmont proper and its surrounding neighborhoods.  Portland Community College has done a great deal to revamp the area surrounding the school campus on Killingsworth and Albina.  Likewise, area residents pride themselves on rebuilding both the homes and the community.

As one of the oldest neighborhood parks in Portland, Peninsula Park has plenty of historic charm. The site was originally owned by a private citizen named Liverpool Liz, who sold the plot to the city for $60,000. In addition to the park, the area also had a quarter-mile racetrack, a campground, and an auto park.

Once the city purchased the land, architects turned it into a formally-designed park. Many of these elements remain today, including the stone fountain in the center, the antique-style street lamps, and the various brickwork. The playground here is also the second oldest in Portland, although it’s just as fun to play on today as it was back in 1916 when the park was finished.

Another highlight of Peninsula Park is its gorgeous rose garden. It was the first public garden in the city, and it was a marvel even back then. Today, residents love to spend hours wandering through the manicured flowers, as it’s one of the most relaxing and picturesque green spaces in the area. The only other garden that can compare is the one at Washington Park.

Although Piedmont is close to some of the hippest areas in Portland, the neighborhood itself doesn’t have an abundance of fresh and unique offerings. Most of the area is residential, with a few commercial warehouses and business parks on the Northern end. That being said, the few gems that you can find here are mostly on Lombard Street, which is always a hotspot for new and exciting places to visit. These are our top recommendations for both visitors and residents of Piedmont.

These days, CBD seems to have taken over the world. As cannabis legalization continues to spread, more and more places are opting for the less controversial CBD oil. If you’re unfamiliar with the difference between CBD and cannabis, here’s a quick crash course. All marijuana plants have two primary elements called cannabinoids. The first is cannabidiol, which is called CBD, and the other is tetrahydrocannabinol or THC. The latter gets you high, while the former offers a variety of health benefits.

As more and more research is done on CBD, scientists are figuring out new ways that it can help individuals. While it’s not quite a “cure-all,” it can aid with various health problems, including insomnia, appetite, depression, anxiety, and even seizures. Because of these benefits, places like Grön serve CBD-infused products like chocolate and candy pearls. You can also buy topical ointments and tinctures if you want a more direct method of ingesting cannabidiol. Also, don’t worry – CBD products can’t get you high. If you want the full experience, we suggest buying edibles from a licensed dispensary.

Grön is also a tasting room, so feel free to come in and sample the many flavors they offer. The CBD does add a bit of an aftertaste, but the silky-smooth chocolate is too delicious to pass up. The candy pearls are also a delight if you’re into gummy snacks. The cafe also serves coffee and tea to create a more full-service experience. 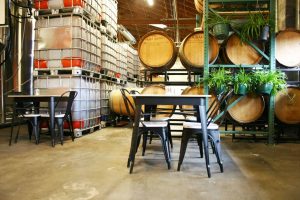 In recent years, hard cider has taken Portland by storm. What was once considered a relative novelty, hard cider is big business in the City of Roses, with taprooms dedicated to the beverage. Swift Cider is one such option, which serves tasting flights, pints, and curated snacks to accompany your sweet beverage. Also, if you prefer beer or wine, they have you covered. The name Swift comes from the bird, which roosts in Portland during the migration season.

The taproom makes a variety of hard ciders, from the sweet to the bitter. On weekends, Swift Cider also hosts tours of its brewing facilities, so if you want to see how they make such delicious drinks, be sure to sign up. The taproom also has a cider club, which introduces new flavors as they come out. Hard cider purists will love the opportunity to sample drinks before everyone else, and the club is an excellent way to meet other like-minded enthusiasts.

Depending on where you go in Portland, Mexican food can take on various qualities. In some parts of the city, restaurants cater to the health-conscious crowd by featuring fresh ingredients, plenty of veggies, and locally-sourced meats. Other places, you get a more “authentic” experience, with lots of spice, garlic, and simple dishes. Mi Burrito is kind of a blend between the two, making it an ideal choice for everyone.

Since 2015, this place has focused mostly on burritos, which means that you can find way more varieties here than you would elsewhere. In addition to the standard favorites like Carne Asada and chicken, Mi Burrito also serves delicious options like steak fajitas, chile Rellenos, steak picado, mole, and even a surf and turf burrito. The restaurant also has the Oregon Burrito, which comes with bacon, potatoes, steak, and cheese. No matter what you’re in the mood for, you can find it wrapped in a burrito.

Since this is a Mexican restaurant, it also serves other dishes like tacos, sopes, tostadas, and ceviche. We particularly like the fresh fish and shrimp options, as they add a bit of flair to the dining experience. Also, considering that most Mexican places don’t serve seafood outside of a shrimp cocktail, we appreciate the variety. 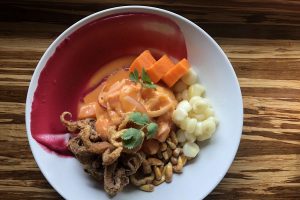 Just down the street from Mi Burrito is a place called Casa Zoraya. At first glance, it might seem to be another high-end Mexican eatery, but once you look at the menu, you’ll notice that the two places are remarkably different. Zoraya is a Peruvian restaurant, which makes it a much more unique experience. If you haven’t had Peruvian dishes before, you’re in for a treat.

Highlights from the menu include pork belly and scallops in rice, shredded chicken empanadas, lamb with rice and beans, fresh ceviche with fish and/or calamari, and Peruvian-style top sirloin. Each item is more mouthwatering than the last, so you’ll want to come back again and again to try something new.

Beyond the food, another reason to add Casa Zoraya to your favorites list is its celebration of Peruvian culture. The restaurant hosts many events and live music acts to help you get the full Peruvian experience. Also, if you’re feeling adventurous, be sure to try a pisco sour while you’re here. The traditional drink comes with bitters, egg white, and simple syrup, and Peruvian alcohol called pisco. Casa Zoraya has different options for this cocktail, so feel free to sample different ones to see what sparks your tastebuds the most.

Nearby parks and recreation:

Dynamic. Community-conscious. A good mix of young families, singles, and local old-timers create a nest of pride and regeneration. Neighbors bond and look out for one another. Block parties, dog walkers, joggers, bicyclists, and babes in strollers are Piedmont staples.

The neighborhood consists of mostly older style homes, with a few turn of the century apartment buildings here and there. Homes run the gamut of 20th-century architecture, from classic Bungalow to Old Portland, to Cape Cod, Four Square, and more. Piedmont was developed in 1895 as an upper-middle-class suburb (not considered a suburb today) which was quickly dubbed as “The Emerald, Portland’s evergreen suburb.”

Piedmont means “foot of the mountain.” A drive through the streets reveals many striking homes with vibrant color schemes and innovative landscaping. The area prides itself on the old-growth trees which are found on nearly every street.

Click here to see all current Piedmont homes for sale.