Roseway is located in Northeast Portland. It is bordered by the Rose City Park, Cully, Sumner, and Madison South neighborhoods. 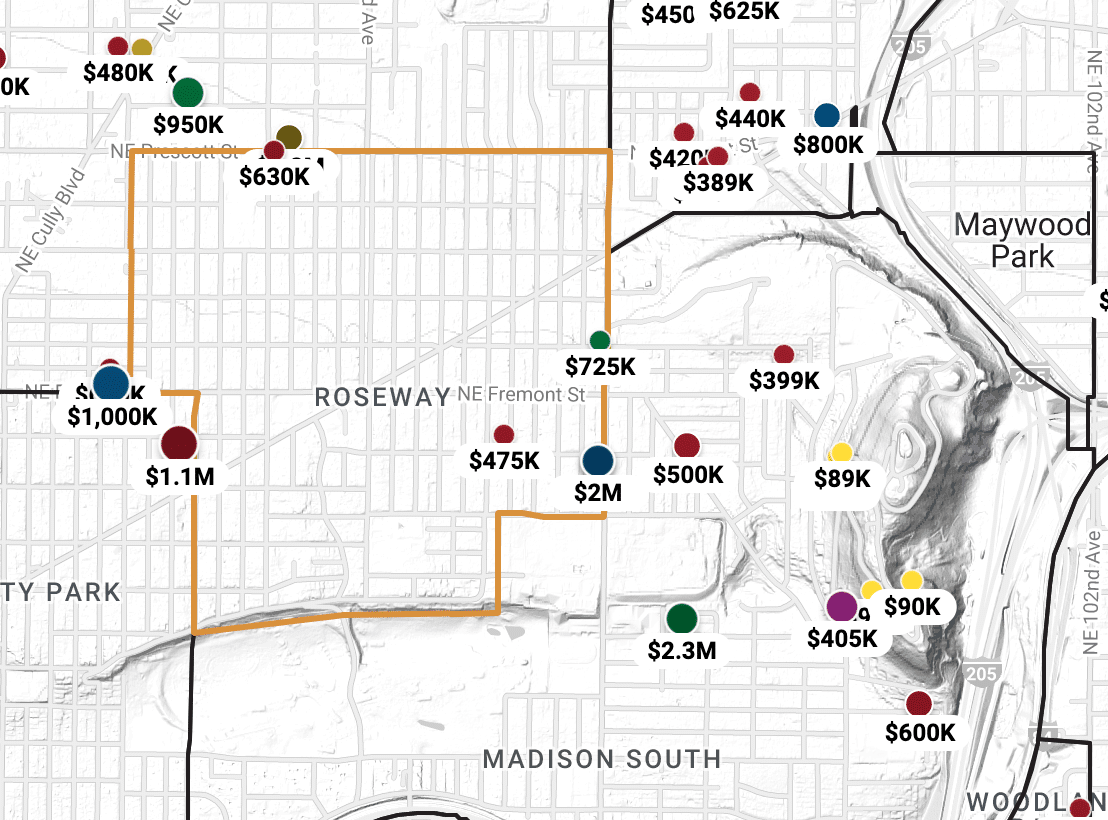 Click the image for a searchable Roseway neighborhood map, including all homes for sale.

In many ways, Roseway looks and feels a bit like most of the other neighborhoods in SE Portland. It is a blend of residential and commercial areas, with plenty of trees and quiet streets for families and retirees.

That being said, Roseway does have a few unique elements that turn it into an above-average neighborhood. The area surrounding Sandy Blvd is steeped in Portland history, as the road served as a highway before interstates became a thing. The photo above is Fairley’s Pharmacy, which is on the corner of Sandy and Fremont street. The building is still there today, although the block has certainly seen some changes since it was built in 1913.

Another historical gem from Roseway’s past was the infamous “Fred Meyer House.” When department store chain Fred Meyer bought the block off of 68th ave, one lone homeowner refused to sell. Rather than scuttle the deal, the store decided to build around it. Talk about convenient shopping access. Eventually, Safeway moved into the lot and relocated the owners to another neighborhood in 1991.

If you were to go downtown, you might be familiar with the park blocks near Powell’s City of Books. Roseway has its own version, the Roseway Parkway. From Fremont Street to Prescott, there are city-block-sized parks that turn 72nd avenue into a divided thoroughfare. These parks are perfect for enjoying the summer breeze, although the traffic makes it a bit too noisy to stay for too long.

Part of what makes Portland such an interesting city is its commitment to preserving and maintaining its old theaters. From the Bagdad on Hawthorne to the Laurelhurst Theater in Kerns, there are tons of cinema gems waiting to be discovered.

The Roseway Theater was built in 1924, back when silent films were the norm. The original space held 600 patrons, and it was quite the scene during its heyday. The structure fell into disrepair during the 70s and 80s slump, but was renovated and restored to its Art Deco roots in the mid-2000s. As with most other old-fashioned theaters in Portland, Roseway shows second-run movies and celebrates its past in style. Too bad movies aren’t as cheap as they used to be in the 1930s.

If you want to check out the action that Roseway has to offer, we highly recommend starting your journey on Sandy Blvd. Most of the businesses and outlets are along this stretch, although you can find some hotspots on both Fremont St. and 82nd Ave. Here are some of the gems you should pay attention to on your next visit.

Typically, the term “indoor play area” calls to mind images of fast food restaurants, ball pits, and tons of loud children. At Nest Playground, however, you’ll discover a much more laid-back and modern experience. While the children are still loud (because they’re having fun), the space is far nicer than anything you would see anywhere else. If anything, Nest is almost like a play lounge.

The newly renovated building offers plenty of entertainment for parents and kids alike. There is a large play structure, toys, games, big-screen TVs, foosball, rock climbing, and even a deli area for food service. If you want a bit more privacy during playtime, you can rent Nest for a personal get-together. They even have a dance studio if you or your little one wants to practice their sick moves.

If there are two things that you can find in abundance in Portland, it’s brewpubs and coffee shops. Even better, the vast majority of these places are locally-owned, meaning that you don’t have to give your money to some conglomerate or CEO.

Kainos Coffee is a quintessential Portland roaster. Not only did it get its start from a pair of passionate partners, but it gives back to the community with every cup sold. Kainos has partnered with the LifeChild Asia Foundation to provide food, education, and clothing to children in the Philippines and Southeast Asia. Although the coffee is delicious enough to warrant a purchase, you can feel good about helping others at the same time. Not only are children benefiting from your habit, but local bean farmers are as well. It’s a win-win-win-win situation.

Moving from one type of brewing to the next, here we have D’s Dive Bar. Don’t worry, that’s not a dig at the establishment – they wear that badge with honor. In fact, D’s website is literally dsdive.bar. It’s the perfect local watering hole for Roseway residents. Each neighborhood has its own, so no matter where you live, a funky bar is never too far away.

D’s has all of the classic pub fare, both in food and entertainment. Monday nights are reserved for Dart tournaments, while Wednesdays are Trivia Night (hosted by the “Quiz Mistress”). D’s also shows sports on the TV, making it a hotspot on game days.

When it comes to food, D’s has you covered with tasty favorites. There’s no sense reinventing the wheel, particularly when leaning into the dive bar aesthetic. They serve burgers, chili dogs, chicken strips, beer-battered fish, and plenty of fries for the table. Salad lovers need not apply.

Although most residents wouldn’t necessarily think of Portland as a “dessert” town, it does have plenty of incredible bakeries that will make you want to leave room for something sweet after your next meal. Whether you’re looking for a dessert to celebrate a special occassion or you just want to feed your sweet tooth, spots like Tres Belles are music to your ears.

This bakery does everything with a sense of elegance and style. Fitting, considering that the owner used to be an interior designer. You won’t find any quirky or funky offerings here – just delicious desserts with a classical aesthetic.

Highlights from the menu include miniature cheesecakes (in multiple flavors), cupcakes, dessert shooters, and even customized frosting on your cookies. No matter what you’re craving, Tres Belles has you covered (in frosting).

Sometimes, you just need a really good meal from a reliable all-purpose restaurant. While Portland has more than its fair share of trendy eateries, spots like Cameo Cafe are holding down the classy diner market. Regardless of the meal you’re eating or the mood you’re in, you can find something tasty to eat at Cameo.

This restaurant is actually the second Cafe, with the first sitting on the ninth hole at Club Green Meadows in Vancouver, WA. However, while you don’t get to see the golf course here, the menu is just as spectacular.

Cameo does serve lunch and dinner, but breakfast is where the menu really shines. We highly recommend coming here for a weekend brunch – you will enjoy every minute of it. Cameo is also home of the “acre” pancake, measuring a full 14 inches in diameter. You won’t see it, but there is a plate underneath (trust us). They also serve Korean-style pancakes if you want something a bit more exotic and savory.

If you want to go on a culinary world tour, visiting one of Portland’s many food carts is the best way to do it. While you can sample flavors from around the globe, one of the best options is Trap Kitchen, which hails all the way from Compton, California.

The story of Trap Kitchen is as exciting as the menu. The concept was developed by two rival gangbangers-turned-chefs. They decided to put aside their differences and focus on what matters most – feeding the neighborhood. Since its founding, Trap Kitchen has become a hotspot in the LA area, getting featured on plenty of radio and TV shows. One of their menu items, the Marth and Snoop, is a reference to the chef’s interview on the Martha Stewart and Snoop Dogg radio show. The dish is a mix of blueberry pancakes and fried chicken.

The menu at Trap Kitchen is full of delectable delights, including mouthwatering burgers, hot wings, mac and cheese, and even vegan potato tacos (we are in Portland, after all). The menu does change regularly, so be sure to scope it out before making your trip.

This area is perfect for families, couples, and retirees. Roseway residents take pride in their neighborhood, and it shows. Businesses here are treated well, and the streets are both quaint and quiet.

Roseway features small to mid-sized single-family homes in styles such as Ranches, Cape Cods, Tudors, and Craftsman Bungalow. The streets are generally sunny with some mature trees.

Click here to search all Roseway Neighborhood homes for sale.