Click the image for a Woodlawn neighborhood map, which includes all homes for sale.

Woodlawn neighborhood is a great, old neighborhood finally coming into its own. Woodlawn is the oldest settled community in the old Albina area—now referred to as the Woodlawn Historic District. Initially settled in the 1860s as a rural farming village, it was the only independent town that existed outside the city of Albina (now Portland). Woodlawn’s character changed dramatically in 1888 when the railroad running from Portland to Vancouver located a train station in the center of the village. This connection to a larger market stimulated commercial and residential development. The commercial uses centered around the train station with home development surrounding the city center. The train depot was located at the intersection of today’s Durham and Dekum Avenues, and the station’s waiting room was built in the middle of a triangular park which is still present today.

Businesses of Note in Woodlawn Neighborhood 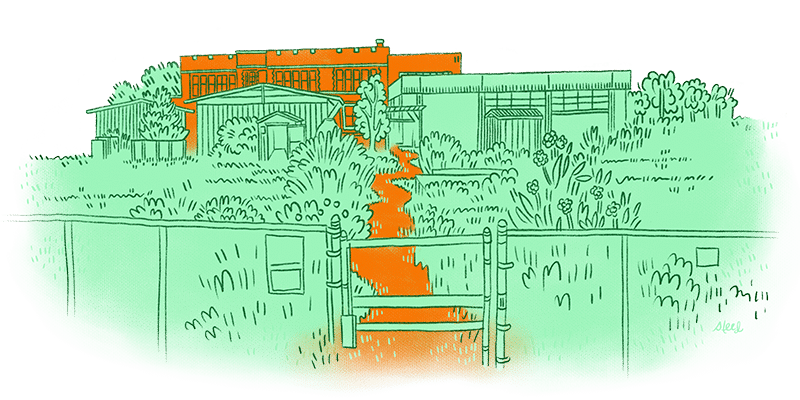 Woodland has a huge community garden next to Woodlawn Elementary School and also adjacent to Woodland Park Amphitheatre and Park Slashpad, and park trails. Together they all create a wonderful community hub, that is also a block away from neighborhood shops and restaurants.

Woodlawn is located in Northeast Portland. It is bordered by the Piedmont, Concordia, Vernon, and King neighborhoods.

Woodlawn is a commonly overlooked neighborhood as it seems somewhat tucked away. Bordering industrial north and northeast Portland, Woodlawn really is a little gem of a neighborhood that is being slowly but surely built into a wonderful family-oriented neighborhood. New businesses have popped up in the last few years such as Woodlawn Coffee and Pastry and Breakside Brewery. These are local hangouts and area favorites. Others like the Good Neighbor Pizzeria shop and The Firehouse, are well-known staples having weathered the early dormant years. The Firehouse is a must-visit restaurant, known for its excellent wood-fired pizzas and amazing locally-sourced dishes served in a beautiful and unique dining setting.

As the name implies, this eatery used to be a firehouse. While it’s no longer fighting blazes and keeping the neighborhood safe, its rich history is impossible to ignore. The owners have leaned into the rustic 20th-century vibe, crafting a menu of simple eats that will warm your heart and soul. Some highlights from the menu include Bavarian soft pretzels, steak frites, pork and beans, and a grilled albacore sandwich. Firehouse is also known for its wood-fired pizzas, so be sure to try a slice when you’re here.

Another highlight of this restaurant is its happy hour. Every day from 4-6 you can much on stripped-down dishes and browse their extensive beer and cocktail menu. Everything on draft is locally sourced, so you can feel good about drinking Oregon beer in a vintage Portland establishment. They also feature some of the best Oregon wines, just in case you prefer vino to a brew.

Part of the exquisite charm of Woodlawn is that so many of the buildings are original constructions. Places like the Firehouse and the Oregon Public House illustrate how much history and culture is infused into this neighborhood. Although Woodlawn Coffee and Pastry hasn’t been around for centuries, it’s located in a 20th-century building, so it still maintains that kind of vibe.

Portlanders are spoiled when it comes to local coffee shops, but Woodlawn Coffee kicks things up a notch by crafting delectable treats and pastries. Best of all, the ingredients are organic and locally-sourced, so they have an extra bit of flavor and pizazz. Cakes, pies, tortes, tarts, coffee cake, muffins – they’re all here. You can also order as many as you like so that you can become even more popular with your family and friends. Woodlawn Coffee also sells lunch, so if you’re in the mood for something more savory, you don’t have to travel far.

As with coffee shops, locals have more than their share of craft breweries from which to visit. Although they are all fantastic, Woodlawn residents will probably say that Breakside takes the top prize. For the last 10 years, this brewery has been crafting some of the best IPAs and other beers in the city. In fact, they’ve won multiple awards, so it’s not even hyperbole.

Best of all, like any good brewery-slash-pub, Breakside rotates its selection seasonally so that you will always have a reason to come back for more. Standard offerings include Breakside’s original IPA, Rainbows and Unicorns beer, as well as their True Gold IPA. Be sure to absorb your beer with some pub food, such as a Cubano sandwich, a spicy grilled cheese, or smoked brisket tacos. No matter what you get here, you’ll be more than satisfied.

When it comes to pizza, Portlanders know to avoid the major chains and focus instead on local pizzerias. Fortunately, Good Neighbor Pizzeria is one of the best options in the neighborhood, so if you’re not going to head to the Firehouse, come here instead. As with most other restaurants in the area, Good Neighbor makes sure to locally-source as many of their ingredients as possible. From fresh cheese to artisan dough, each element is crafted with exquisite taste.

Another reason to love Good Neighbor Pizzeria is that they have two happy hours (every day) and they are open late. Although you shouldn’t have to ask (this is Portland, after all), yes they serve beer and wine. You can also get Stumptown coffee if you’re trying to stay awake into the wee hours of the night.

As far as pizza is concerned, you can build your own pie however you like, although the chefs at Good Neighbor have created some excellent options. Highlights include the Fremont – ricotta cheese, garlic cloves, and olive oil – Hog Heaven – pepperoni, sausage, Canadian bacon, regular bacon – and the New Farmhouse. That pizza comes with roasted chicken, fresh-cut bacon, heavy cream, green onions, and garlic. You’ll need to come with some friends so that you can try different pies without any shame. 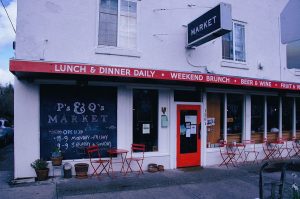 While it’s easy to get freshly-made food at one of Woodlawn’s eateries, sometimes you just want to make it yourself. Fortunately, you don’t have to find the nearest supermarket to get some of the best vegetables, meats, breads, and grains. If you’re in the area, be sure to stop by P’s and Q’s Market. This market and deli is a neighborhood mainstay, creating a sense of community while offering high-quality food.

That being said, if you still want someone else to make your meal for you, P’s and Q’s has an extensive lunch and dinner menu. Some highlights include polenta fingers (fried polenta with dipping sauce), brisket and black bean chili, and an oyster po’boy sandwich. The market also has community dinner nights each week, such as spaghetti nights on Mondays and catfish nights on Fridays. Overall, if you want to meet your neighbors, here is the best place to do it. 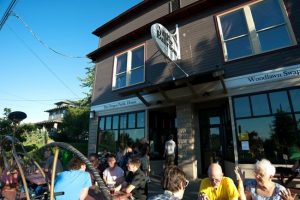 You may already be aware that Portland is home to the most craft breweries per capita in the world. However, did you also know that it’s home to the most non-profit organizations as well? Fortunately, you can eat, drink and be merry while also giving back to the community. The Oregon Public House is designed to blend both of Portland’s favorite pastimes so that you can feel good while spending a night out. It’s the world’s first “philanthropub” (although hopefully not the last).

No matter what cause you care about, chances are you can support it here. OPH hosts events and fundraisers all throughout the year for organizations specializing in animal rights, children’s welfare, the arts, low-income housing, and a slew of others. Since the pub opened in 2013, they’ve donated over $200,000 to local non-profits, and there are no signs of things slowing down. Fortunately, the owners make it easy for groups to partner with the pub to raise awareness and earn money from events. This convenience ensures that more and more charities get to benefit from this unique and progressive system. 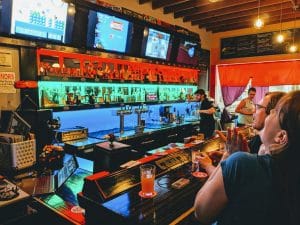 Do you like playing old-school video games? Do you remember gathering with friends around the N64, Atari, or Sega console? If so, then you will want to make a trip to Retro Game Bar. This is the only place where you can relive the glory days by playing some of the biggest video games of the 70s, 80s, and 90s. In addition to the mega-hits like Sonic, Super Mario, and Contra, there are plenty of oft-forgotten gems that will allow you to whittle away the hours. Best of all, Retro Game Bar uses original consoles and cartridges (as much as possible) so that you get an authentic gaming experience.

So, with the “Retro Game” part of the name handled, how does this place fare as a bar? First of all, each cocktail is named after a game, such as the Ocarina of Thyme, Bowsette, and Song of Storms. Fortunately, they know how to mix a drink as well as they know obscure gaming references, so you’ll be sure to enjoy your beverage while you play. If you really want to go all-out, rent one of their party rooms and get wild. It will be like your 10th birthday party all over again (except now you can drink)!

Woodlawn Community Garden – In June 2008, in collaboration with the Portland Trail Blazers and Fred Meyer, the Woodlawn Children’s Garden Program was launched. An industrious group of volunteers from Fred Meyer and the Blazers worked with neighborhood children to clean up the garden area, completing several weeks of work in a matter of hours. A ceremonial planting of vegetables by mascots Blaze the Trail Cat and Fred Bear commemorated the new partnership.

Quiet, community-conscious, cyclist and family-friendly. Woodlawn has transformed in recent years to become a central part of the “New Portland” scene. Thankfully, though, because of the historical buildings and community-centered mindset of its residents, Woodlawn isn’t entirely unrecognizable from years past. It’s a seamless blend of old and new Portland, making it ideal for everyone.

Click here to see all current Woodlawn homes for sale.