The Kenton neighborhood is located in North Portland and is bordered by Arbor Lodge, St. Johns, and Piedmont neighborhoods. Kenton is also in close proximity to other popular neighborhoods via the Max light rail which is located on nearby Interstate Avenue. A drive to downtown Portland is a mere 7-8 minutes away in good traffic conditions and a bike ride is about 25 minutes and is in mostly designated bike lanes. 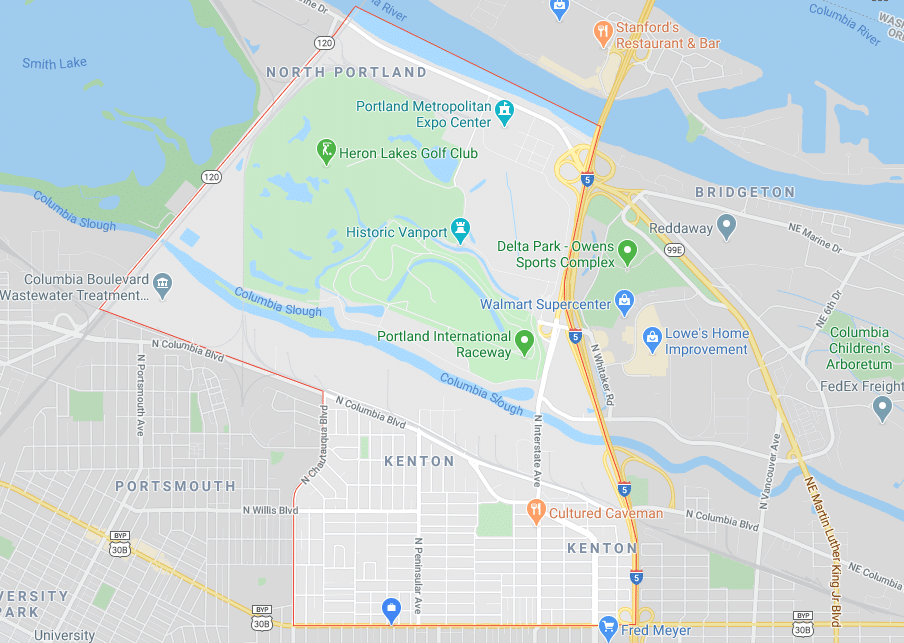 Click the image for a fully searchable Kenton neighborhood map that includes all homes for sale.

Like many of the surrounding Portland neighborhoods, Kenton has been evolving but on a slower scale. The streets have new life and many of the vacant buildings have been rented and great local businesses have emerged. Locals enjoy indie businesses such as Posies Bakery and Cafe, Kenton Station Restaurant and Pub, Fino Bistro Bar and Pizzeria, and their very own library.

Another notable feature of the Kenton neighborhood is the 31-foot tall Paul Bunyan statue on the corner of Denver and Interstate ave. Considering that Denver ave is one of the main thoroughfares of the area, it’s fitting that you’re greeted by such a vibrant local landmark. The statue was first erected in 1959, on the 100th birthday of the State of Oregon. It’s also currently listed in the National Register of Historic Landmarks, so be sure to get your picture with Paul whenever you’re in town.

Kenton has some wonderful areas with beautifully improved homes and streets yet some are still in transition. Denver is the main drag and feels like the downtown in a very tiny city.

The experience you’ll get when visiting the Kenton neighborhood will depend on which street you’re traveling. Main thoroughfares like Denver Ave. and Lombard Street are full of shops and interesting finds, but the entire northern section of the neighborhood is home to massive green areas, including the Heron Lake Golf Course and Portland Raceway. Kenton is a delightful mix of residential streets and busy city streets, so be sure to explore as much as possible. Fortunately, we’ve done most of the hard work for you by distilling the best that Kenton has to offer below.

Paul Bunyan Statue is a 31-foot-tall (9.4 m) concrete and metal sculpture of mythical logger Paul Bunyan in the Kenton neighborhood of Portland, Oregon, United States. It was built in 1959 to commemorate the centennial of Oregon’s statehood during the Centennial Exposition and International Trade Fair, which was held in the Kenton area. Source: Wickipedia 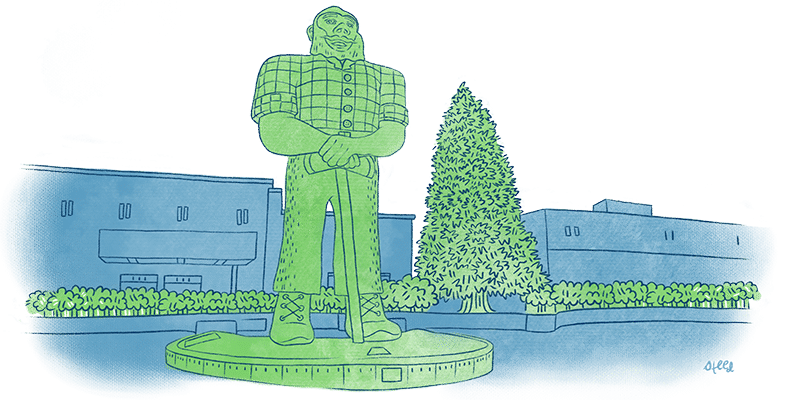 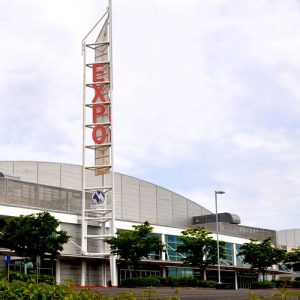 If you ever want to attend a trade show in Portland, then one of the best venues to do it at is the Expo Center. There are several massive event spaces within the city (the Oregon Convention Center comes to mind), but Kenton is home to the largest. All told, this campus encompasses 53 acres and has 33,000 square feet of vendor space across five exhibit halls.

This place always has something going on, so no matter what time of year it is, you can find an event show to attend. Some examples include the sportsmen’s show, the family show, and numerous gun shows that pass through. Whatever your interests are, be sure to check out the Center’s calendar to see what’s coming up. 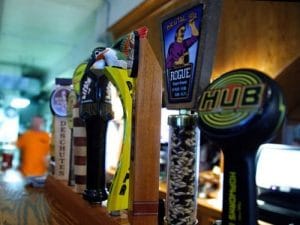 One of the best things about living in Portland is that there is so much history behind some of its finest establishments. Kenton Station is a must-visit for those who want to experience a living piece of Portland’s past. The building was erected in 1909 by the Swift Meat Packing Company. At the time, it was called the Kenton Hotel, and it was the crown jewel of the town. Kenton itself was developed as an easy way for meatpackers to meet with cattle ranchers to buy and sell stock.

The building has its own sordid history, most of it lying below the surface in the legendary basement. During Prohibition, it served as a speakeasy, and it also connected to a series of underground tunnels that led out into the city. One of the highlights in the basement was a boxer named “Mysterious” Billy Smith, who attracted crowds whenever he sparred.

Today, the building reminds visitors of its history with a haunted basement tour. The hotel fell into disrepair in the 60s and 70s but was refurbished in the early 90s to stave off a demolition order. Numerous ghosts have been spotted on the property, so guests are forewarned if they happen to spot any apparitions. For those who aren’t interested in ghost hunting, Kenton Station is fantastic for getting delicious bites and tasty brews. 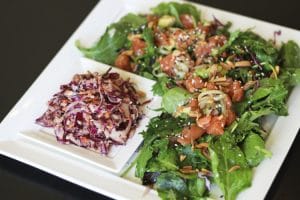 For those with dietary restrictions, Portland is something of a destination city. Whether you’re vegan, keto, paleo, or gluten-free, you’re sure to find both stores and restaurants that can cater to your needs. One such place is Cultured Caveman, which sits along the busy main drag of Denver ave in Kenton.

This fast-casual restaurant (and general store) is specifically designed to fulfill those on the Paleo diet. For the uninitiated, Paleo eating is all about consuming foods that would have existed during Caveman times. Although that’s mostly impossible after centuries of farming practices, what it really translates to is eating raw foods that could presumably be hunted or gathered in their current state. Bread and complex carbs are not on the menu here, although some dairy and cheeses are allowed.

Cultured Caveman started as a food cart in northeast Portland in 2012 and has since grown to a full-scale eatery. Menu options are both simple yet inspired, including hits like pork carnitas tacos, bacon almond dates, and lamb liver pate. Your tastebuds will be pleasantly surprised, even if you’re not a Paleo enthusiast. 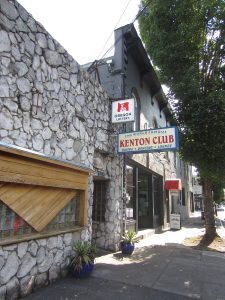 Although the name may elicit images of a members-only club that caters to the elite members of Portland’s upper crust, the fact is that the Kenton Club is one of the best dive bars in town. Considering that we’re talking about Portland, OR here, that distinction really means something. While true “dive” bars are becoming less and less frequent these days, it’s not hard to walk into a place that has cheap drinks and a questionable vibe (in a good way). Fortunately, Kenton residents don’t have to look far for an underground Portland nightlife experience.

The primary reason to visit The “World Famous” Kenton Club is that it hosts live music every Thursday, Friday, and Saturday night. That, and the modestly-priced drinks. However, if you want somewhere to celebrate the meal of brunch, The Kenton Club has you covered there as well. This fabulous meal is served every Saturday and Sunday, so be sure to book a date with your squad and see what a KC brunch is all about. 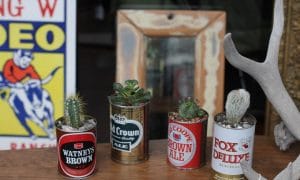 As you may have already surmised, many of the businesses within this area like to showcase neighborhood pride. Located just south of the Kenton Club (and Kenton Station) is this funky and eclectic antique shop. There are plenty of vintage-centric boutiques in Portland, but this place is just a step above the rest. Treasure hunters can spend hours browsing through the rotating selection, and true aficionados know to come back regularly to see what’s new on the shelves.

Kenton Antiques is the perfect place to find everything from vintage metal signs to antique toys to retro pop-culture references. No matter what you’re into, chances are that you’ll discover something incredible on your visit. Even if you’re not particularly in the mood to find anything, you’ll likely walk out with a package under your arm. 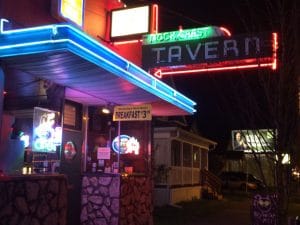 Kenton neighborhood is unique in that many of the businesses here have a long and compelling history. In the case of the Mock Crest Tavern, it was built in 1947 and named after local icon John Mock. Originally, the space was a meat market and ice cream vendor, but over the years, it transformed into one of the best live music pubs in the city. While The Kenton Club is perfect for those who want a “dive bar” vibe,  Mock Crest is a little more upscale. Not only that, but the music selection is more along the jazz and blues side of things.

Another reason to stop by Mock Crest is the excellent food and beer menu. The tavern has eight rotating taps and a vast selection of locally-sourced brews. When it comes to eats, you can find typical bar food alongside more interesting fare like the habanero bacon blue burger and the fish burger. Also, happy hour happens twice per day, so you can eat, drink, and be merry on a budget. 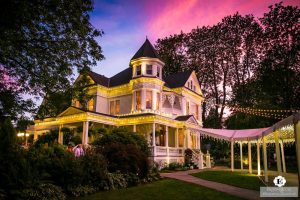 For those looking to tie the knot in Portland, there are some incredible wedding venues available. However, if you want historical luxury, one of the best options is the Victorian Belle Mansion. What separates this space from others (i.e., Pittock Mansion) is that it was built out of love. The house was erected in 1885 as a wedding gift from local magnate David Cole to his new wife Amanda Laura Boone (of Daniel Boone fame). So, couples can experience just a taste of the magic that was imbued into these walls, most of which are still original.

What also makes the Victorian Belle more captivating is that the house was ahead of its time when it was constructed. Nowadays, central heating, running water, voice-powered intercoms, and indoor electricity seem commonplace. However, when the property was built, they were cutting edge. Now you can experience the wonder for yourself.

Heron Lakes Golf Club – 340 acres of pristine grounds. This is one of the only 36-hole courses in the Pacific Northwest, and it’s been around for over 60 years.

Evolving. On the cusp of something special…something fantastic. Neighborhood locals are extremely down-home, very approachable. Walking through the commercial district of Kenton will spark entrepreneurial thoughts of opening your own cute storefront. For those of you that remember Mississippi Ave before it was a hip, thriving district, you’ll know that just a decade ago, the area was basically abandoned and largely unsafe. All it took was a few brave entrepreneurs to come in and begin to fill the void.

We predict that Kenton is one of the next up and coming neighborhood in North Portland.

Kenton is comprised of mostly modest homes with architectural styles such as Portland’s Craftsman-style Bungalow, Cottages, Old Portland, Victorian, Foursquare and other mid-sized, one and two-story homes.

There are some amazing old homes in Kenton, especially on Denver Avenue, which is the start of the commercial district. True to Portland style, this neighborhood will reveal creative paint schemes, innovative landscaping, and attention-to-detail restoration efforts. This lovely neighborhood is truly a gem given some still affordable home prices and a neighborhood community that truly cares about the growth and overall livability of the area.

Click here to see all current Kenton homes for sale.