Southwest Hills is located in Southwest Portland. It is bordered by the Sylvan Highlands, Goose Hollow, Downtown, Homestead, Healy Heights, and Bridlemile neighborhoods. This neighborhood is located close in, for an easy commute to downtown Portland. Unlike most major metropolitan areas, it’s unique to find such an upscale neighborhood within spitting distance of the downtown area. However, thanks to Southwest Hills’ natural boundaries, you’d never know that you were so close to the hustle and bustle of this growing city. 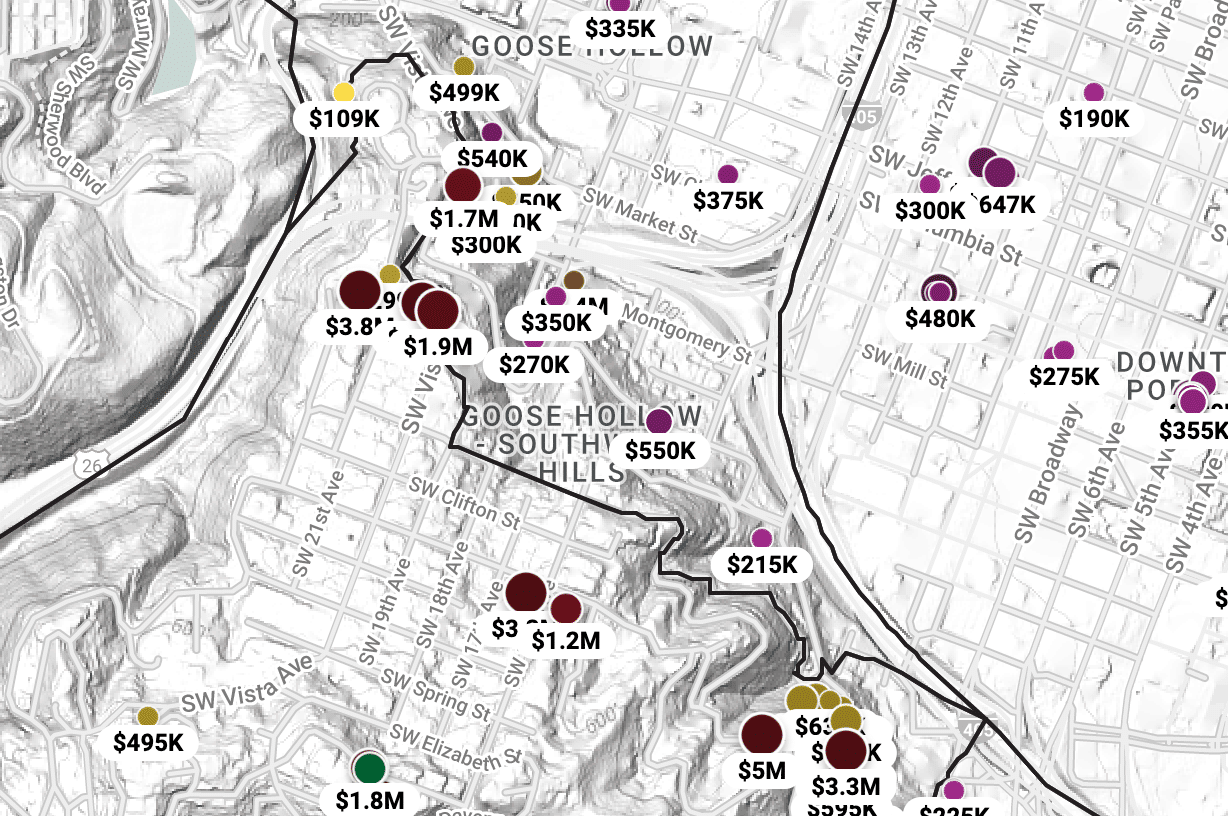 Click the image for a full searchable map of Southwest Hills neighborhood, including all homes for sale.

This park has commanding views and used to be the home of a city amusement park. Meet the illustrator.

The Southwest neighborhood is located in what is popularly known as the “West Hills” in Portland. The hilly terrain and lush nature parks in this area create stunning views from many of the homes. Depending on which area you are in, you may have a panoramic view of downtown Portland, and on a clear day, it is possible to see Mt. Hood, Mt. Adams, and Mt. Saint Helens in the distance.

Another aspect of Southwest Hills is that it’s full of history and connections to Portland’s storied past. In fact, one of the oldest and most notable homes, the 1918 Frank J. Cobbs House is in this neighborhood. For architectural enthusiasts, this is one of the most luxurious estates you can find around Portland, save for Pittock Mansion.

One of the primary reasons why Southwest Hills is so desirable for the upper crust of Portland’s society is that it comes with so many green spaces. Even if you’re not exploring one of the several parks within the neighborhood’s boundaries, you are surrounded by lush trees and a verdant landscape.

That being said, Southwest Hills is home to some of the most decorated and historic parks in the area, particularly Council Crest. You can take a veritable trip through time by walking through these parks as they are deeply rooted in Portland’s history. Let’s take a closer look at the natural beauty you can find within this neighborhood. 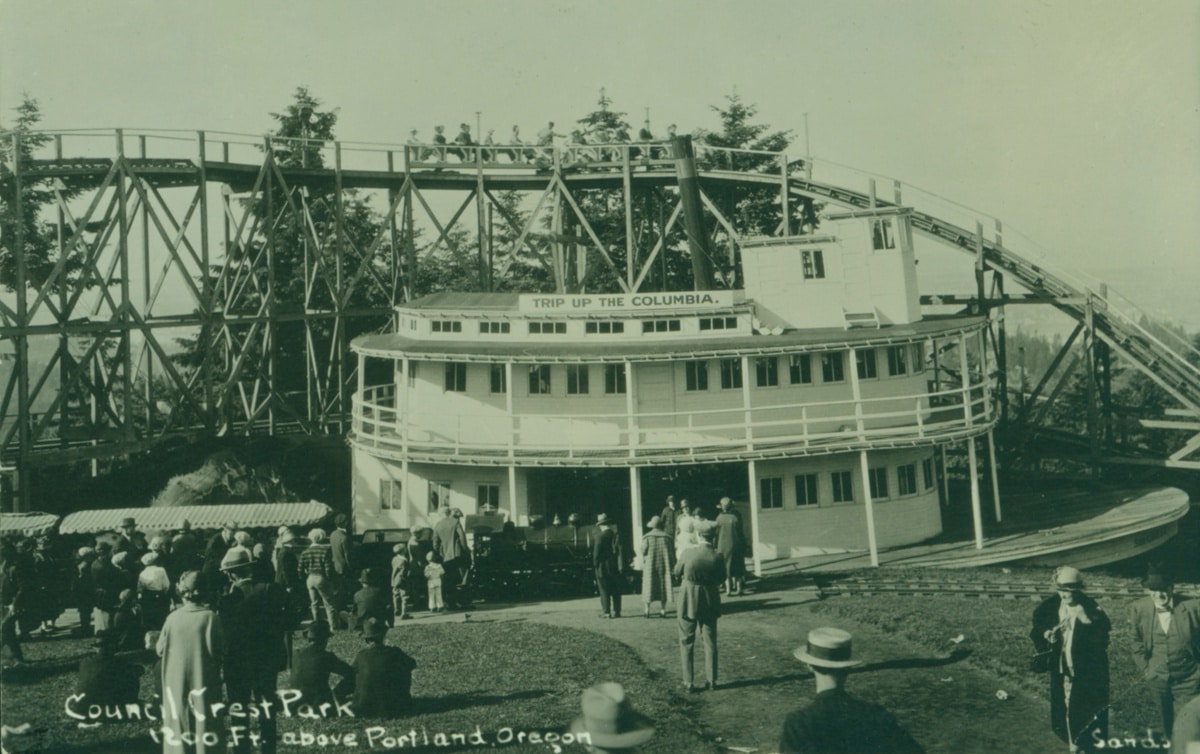 If you go up to Council Crest today, you’ll be greeted with some of the best views in all of Portland (or Oregon, for that matter). However, near the turn of last century, this spot held a lot more than nature trails and a scenic overlook. Council Crest was the home of an amusement park, which opened on Memorial Day of 1907.

The park was originally named after the belief that local native Americans used to hold meetings at the top of the ridge. While there was no evidence to support that, the name stuck and continues to this day. The rides and games were installed as part of a promotional campaign by the Portland Railway Light and Power Co. PRL&P had just finished a streetcar line that went up to the park, so they wanted a compelling reason for travelers to visit.

When guests arrived at the amusement park, they were greeted by a handful of rides and several other installations. The two main attractions were the Trip Up the Columbia (which we see above), and the L.A. Thompson Scenic Railway. In addition to these rides, there was also a Ferris Wheel, a Japanese Tea House, a carousel, a midway with various carnival games, and a dance hall. At the time, Council Crest was called “The Dreamland of the Northwest.”

One element that was prominently displayed in postcards and concept art was a proposed observatory, called the “Big Tree.” Unfortunately, it was never erected before the park shut down in 1929.  Instead, they built the Lewis and Clark Observatory, which was much shorter, but provided incredible views of the city below.

Other attractions within the park included a canal ride, where riders would float along a trellis filled with water, and hot air balloon rides. During its heyday, hundreds of people would come to marvel at the scenery and play “at the top of the city.” Although the amusement park shut down in 1929, it wasn’t demolished until the early 1940s.

Today, the park is still a popular site for both tourists and locals, and it is the highest spot in Portland at 1,073 feet. On a clear day, you can see four different mountains. Mount Hood, Mt. Saint Helens, Mt. Rainier, and Mt. Adams. From Council Crest, you can connect to some of the trails that venture down into Marquam Nature Park. 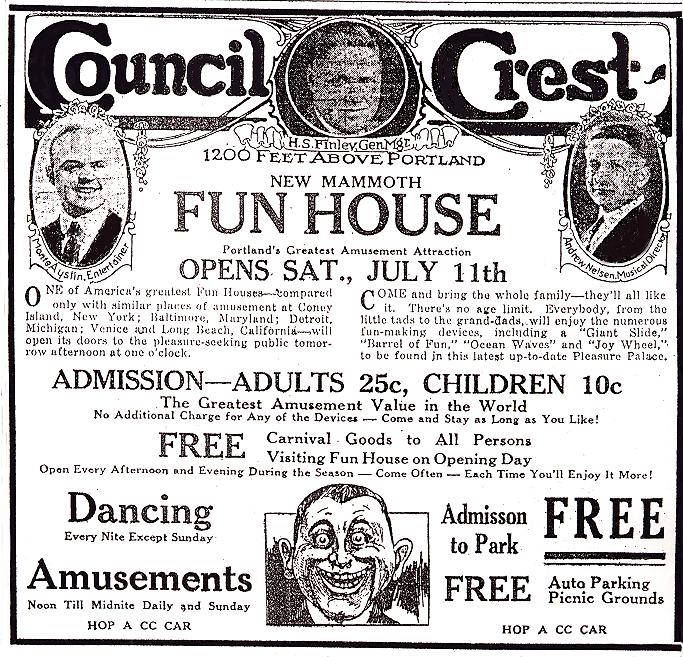 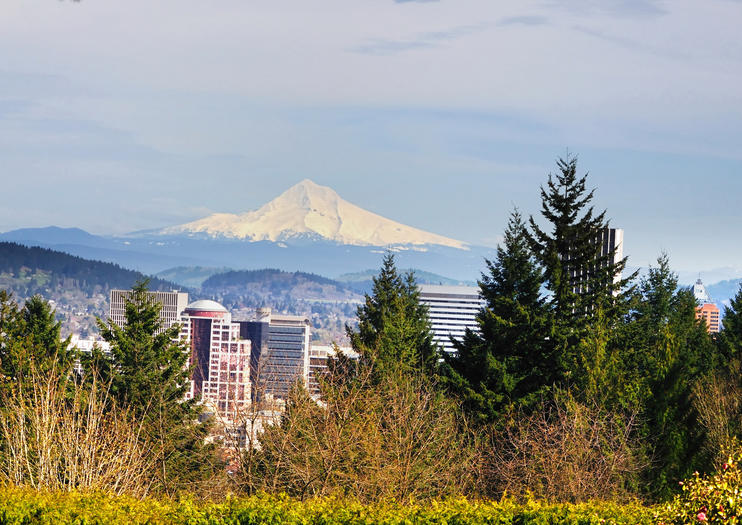 Technically speaking, Washington Park is not within Southwest Hills’ borders, but it’s just across Highway 26, so you can see it from various parts of the neighborhood. Washington Park is a natural highlight of Portland, thanks to its multiple attractions. Here you can find the world-famous Portland Rose Garden, the Japanese Garden, and the Oregon Zoo. If you’re a fan of nature and exploration, we highly recommend you visit all three. 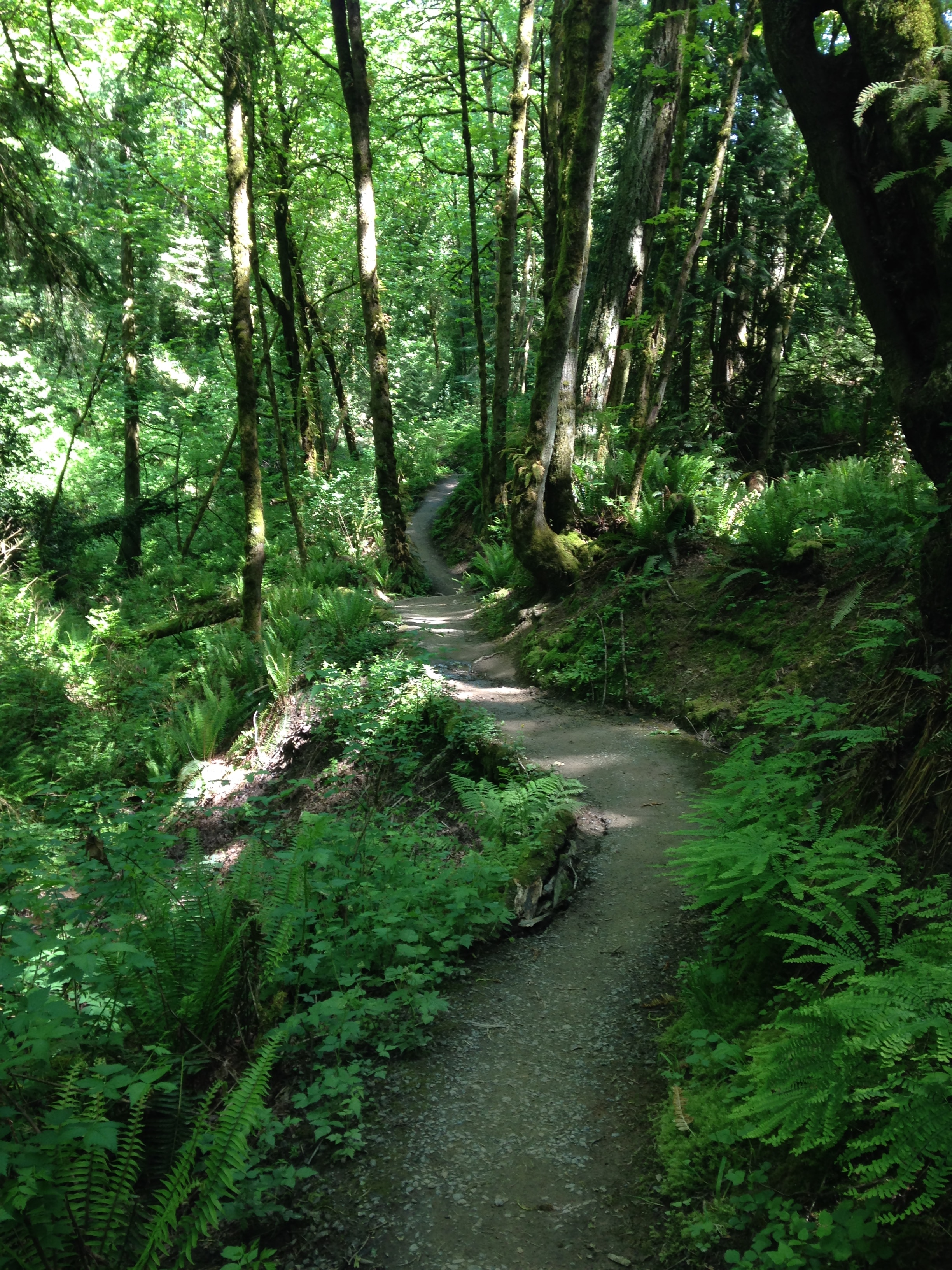 With most of the parks in Portland, the objective is to marvel in nature and relax. However, if hiking is more your prerogative, then Marquam Nature Park is the place to visit. Only part of the park is located within Southwest Hills, but the whole area spans over 178 acres. It contains dozens of different trails, some of them spanning miles. We highly recommend bringing food and water to last for several hours, at you could easily spend all day traversing the various paths that cut through the forest.

Marquam also encloses the Oregon Health and Science University campus and extends down along Terwilliger Blvd. Overall, you can get excellent views of the city and the Willamette River from different parts of the park, although the nature of the forest is the main attraction.