Maplewood is a small, quiet, residential neighborhood located in Southwest Portland. It is bordered by the Ashcreek, Hayhurst, and Multnomah neighborhoods on the east and Washington County on the west. The neighborhood is almost all families and retirees, thanks to its abundance of homes, green spaces, and relaxed atmosphere. Maplewood is close to downtown Portland but without all the hustle and bustle. 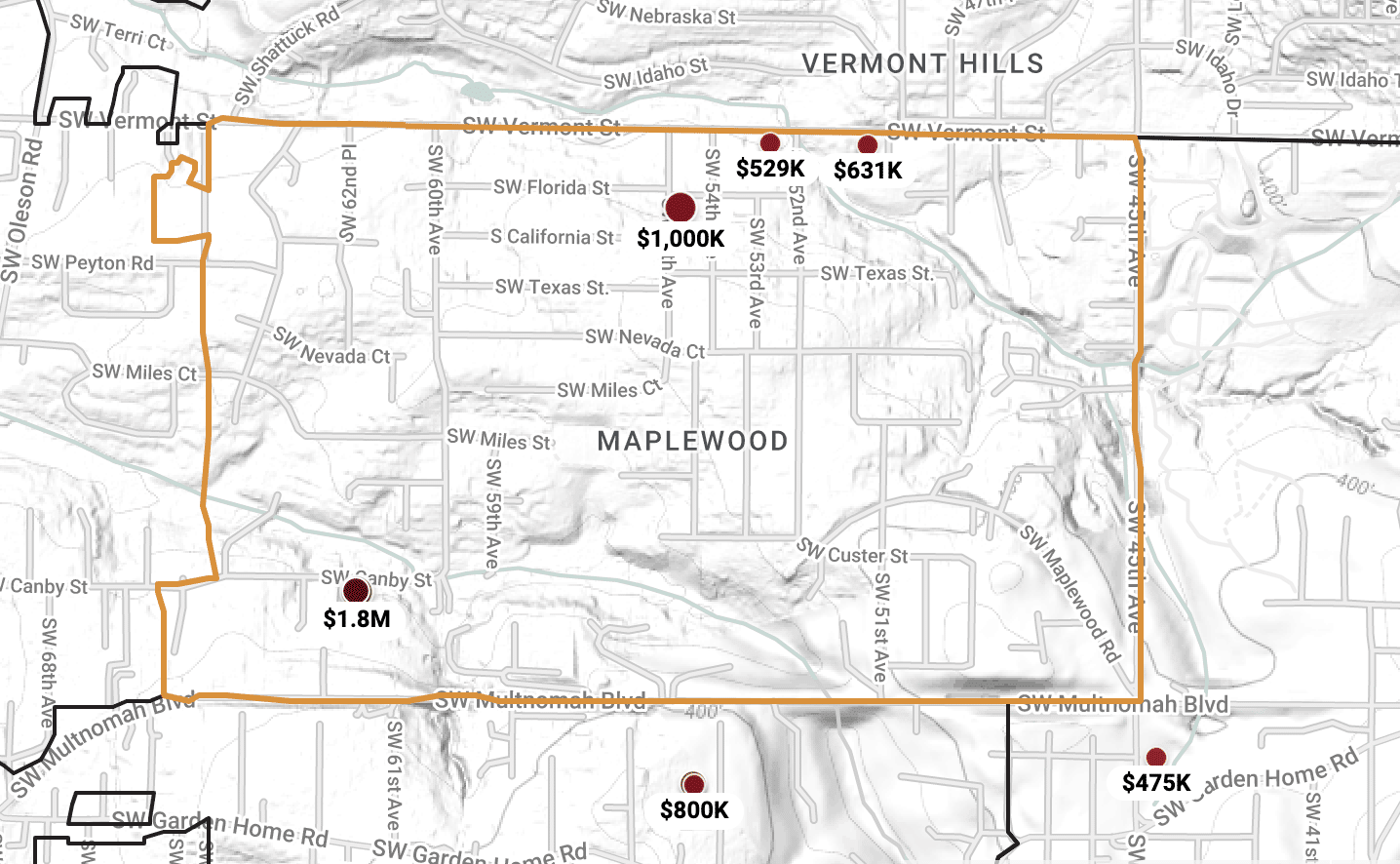 Click the image for a fully searchable Maplewood neighborhood map, including all homes for sale. 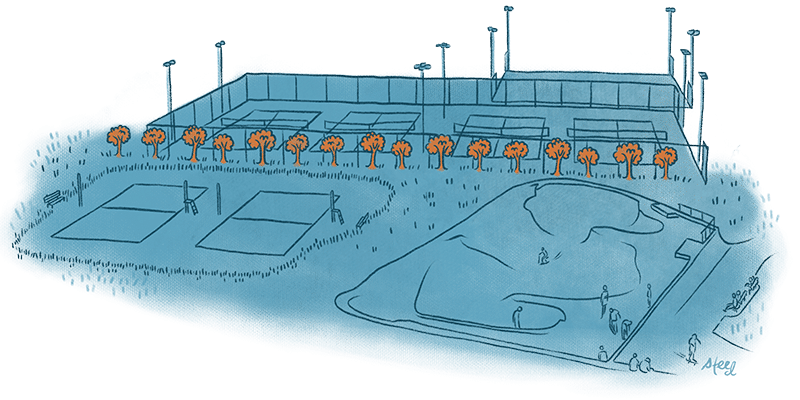 Features of the Maplewood Neighborhood

Maplewood is located in Southwest Portland, and as such, features a nice mix of suburban and rural options, while being located relatively close to downtown for an easy commute.  There are a wide variety of home styles, and some areas feature hills with views.  There are plenty of popular Portland neighborhoods in this area located nearby, such as Multnomah Village, so there are many areas to shop and find family-friendly activities.

One interesting feature of Maplewood is that most of the East/West streets are named after states. Starting with Nevada in the middle of the neighborhood, there are Texas, California, Florida, and Vermont St, which forms Maplewood’s northern border. The states do continue up into the Hayhurst Neighborhood, with streets like Idaho, Nebraska, and Illinois. It’s like a US geography lesson on your GPS.

Speaking of driving, Maplewood has many side streets, cul-de-sacs, and unpaved roads. It can be easy to get lost if you don’t know your way, so plan your travels accordingly. Vermont and Multnomah streets are the North/South borders of the neighborhood (respectively), and 45th ave marks the eastern edge. There is no official western border, so you may find yourself in Washington County without even realizing it. 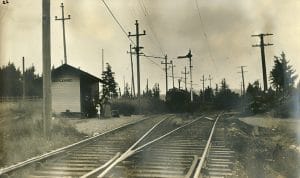 Although this neighborhood isn’t as flashy or as famous as some of the others in Portland, it does have plenty of history within its streets. The name of the neighborhood came from the Oregon Electric Trains, which used to roam the SW Hills heading out to Beaverton. The stop next to Gabriel Park was originally called Kusa, after a local Native American tribe. However, when developers started planting maple trees along the tracks, the stop was renamed Maplewood. The locals liked it so much that they used it when incorporating the neighborhood several years later.

One of the main hubs of the area was the Maplewood Store and Post Office (now Maplewood Coffee and Tea). It not only served as a place for supplies and mail, but it also worked as a real estate office. Most of the listings within the neighborhood told people to “inquire at the Maplewood Store.” At the time, plots of land sold for $60 to $90, with houses selling from $3,500 to $5,000, depending on its size and features. Many of these original homes still stand, offering homeowners the chance to be a part of Maplewood’s history.

Because this neighborhood is almost exclusively residential, there are few businesses within its borders. However, if you are a coffee lover, Maplewood does have two coffee shops, so be sure to check them out. Otherwise, enjoy the quiet splendor of this area by taking a stroll along one of the many tree-lined streets, relax in April Hill Park, or go for a leisurely drive. 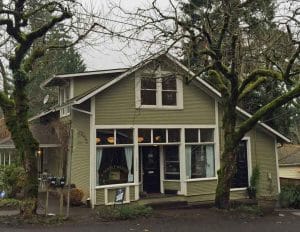 When it comes to gathering places in Maplewood, nothing really compares to this coffee and tea shop. The original building was erected in 1911 and served as a post office and general store for many years. These days, it’s an excellent spot to get some delicious brew, hang out with friends, and eat some incredible foods. Weekends are for brunch, and Maplewood Coffee offers a simple menu full of local ingredients.

For breakfast, you can choose from a wide array of traditional favorites, along with a few more “hip” alternatives. Egg sandwiches, waffles, and stuffed French toast are mainstays, and you can also get dishes like Chia pudding and a chickpea sandwich. Add-ons include vegan sausage, gluten-free toast, and, a Millennial favorite, avocado (on toast or on the side).

While the kitchen typically closes at 3 pm most days, Maplewood also has a seasonal dinner series. Guests pay a flat rate (with or without drinks), and they can enjoy a taste of Oregon’s various ecosystems, from the coast to the desert. Dinners are served family-style, making it even more inviting and community-oriented. Be sure to reserve your spot early, as these dinners sell out quickly.

The Maplewood Neighborhood Association also meets at the coffee shop regularly, so if you want to become more involved with the community, be sure to pop into a meeting. Maplewood Coffee and Tea has a decent-sized event space, making it ideal for all kinds of gatherings and parties. Just as the building was a central hub for the neighborhood 100 years ago, it continues to be today. 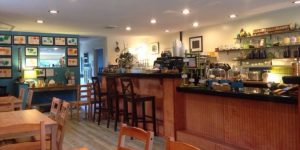 Portlanders love their local coffee shops, and Driftwood seems to be a quintessential part of the Portland experience. Sitting on the border of the neighborhood on Vermont st, this place doesn’t command much attention. However, once you go inside, you feel welcomed immediately, like you’re walking into a friend’s house.

Locals love this coffee shop because it offers incredible brews and tasty treats. Helping to make this place “peak Portland,” Driftwood offers confections from many area bakeries, including Delphina’s Bakery and Honey Mama’s. Many of the baked goods are vegan and/or gluten-free, so you can indulge without feeling guilty.

Adding to the eclectic vibe of this place is the artwork on the walls and throughout the shop. As with the treats, the art pieces are all from local creatives, and many of them are for sale. Come in for the coffee, and stay for the atmosphere – that’s the Driftwood motto.

Although the only park in the neighborhood is April Hill, many residents like to visit Gabriel Park, which is just across 45th st to the east. Both green spaces are perfect for both families and dogs, thanks to outdoor playgrounds and dog-friendly locals. Gabriel Park is one of the biggest in the area, and it offers plenty of outdoor activities, including tennis, skateboarding (there is a concrete skate park), and hiking.

Other parks close to Maplewood include Hideaway Park (in Washington County), and Pendleton City Park. However, thanks to the abundance of greenery within the neighborhood, most streets feel like you’re out in the wilderness anyway.

Tri-Met – Interactive Maps and Schedules for Bus, Max, and Streetcar

This neighborhood has some of the highest-rated schools in SW Portland. While you can put your kids into the Portland Public School system, there are several alternatives, including a Montessori school and a Christian Elementary.

Although this neighborhood is relatively small, it does have four churches within its borders, as well as a Buddhist congregation. Whether you are Christian, Baptist, Presbyterian, Lutheran, Buddhist, or Jewish (there is a Jewish orchestra in Maplewood), all faiths and beliefs are welcome here. The abundance of religious organizations also helps create a more tight-knit community.

The Southwest area of Portland features more mature trees, established neighborhoods with older homes in a variety of styles, and a comfortable family-friendly feel.  There are several parks and nature areas in the Southwest hills, making it easy to get away from it all while still being in the city.  If you enjoy a more rural feeling neighborhood, while still being located fairly close to the city, Maplewood might be a good fit.  Maplewood is located within easy driving distance to downtown Portland.

One of the best things about buying a home in Maplewood is that you get plenty of green space with it. Most of the houses around here are original, with a few modern additions sprinkled throughout. Many places have trees surrounding them, offering some extra peace and quiet. While the neighborhood is much more welcoming than others in Portland, it’s nice to have a little bit of privacy from your neighbors.

Click here to search all Maplewood Neighborhood homes for sale.