The Foster Powell neighborhood is located in Southeast Portland. It is bordered by the South Tabor, Creston-Kenilworth, Mount Scott Arleta, Richmond, Powellhurst-Gilbert, and Lents neighborhoods. This area is one of the more unique in Portland, thanks to its triangle shape. The streets Foster Blvd., Powell Blvd., and 82nd Ave. form the borders of this neighborhood. 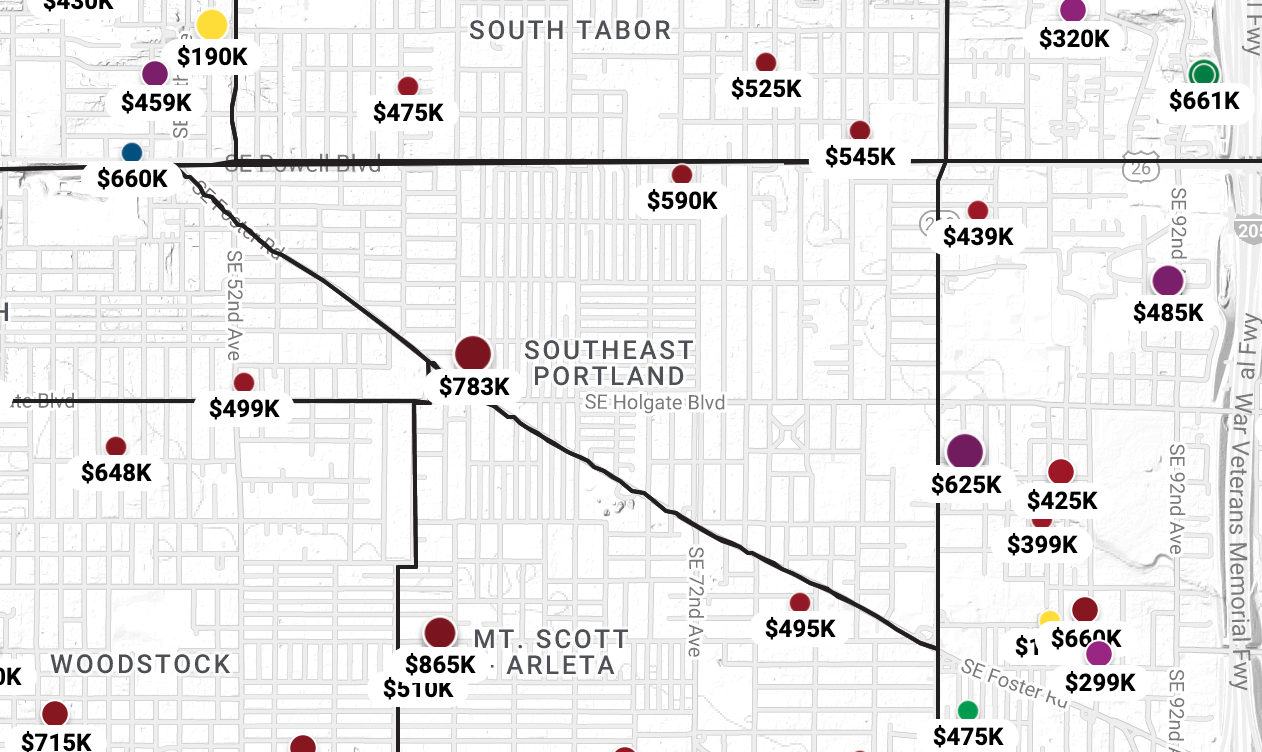 Click the image for a fully searchable Foster Powell neighborhood map, including all homes for sale.

Features of the Foster Powell Neighborhood 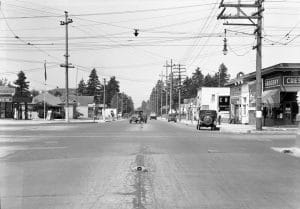 As a result of the Portland real estate market boom, Foster-Powell has seen an influx of new residents to the area which has helped to create a new and vibrant community. As one might imagine, Foster-Powell has some wonderful areas with beautifully improved homes and neighborhoods, and some still in transition.  There is a very high concentration of recent immigrants with Foster-Powell being home to a large portion of Portland’s Russian and Ukrainian immigrants. In recent years, the area has seen an influx of Asian-Americans, mostly Vietnamese. Further north on 82nd is known as Little Saigon, and its influence is spreading along the boulevard. Because of this, there are some great authentic restaurants and shops in this neighborhood.

Foster-Powell is so named because of the streets that mark its borders. Foster blvd, however, is named after a Portland pioneer, Phillip Foster. Phillip arrived with his family in 1843, and his wife Mary was the sister of Francis Pettgrove, one of Portland’s founders. Initially, this area was mostly farmland, with sporadic homesteads and roads. The neighborhood began as part of the Kern Park streetcar subdivision and was annexed by Portland in 1908 to become part of the city.

Throughout the years, Foster Powell has had its share of ups and downs. Its low point was during the 70s and 80s when crime was rampant and the area was in significant decline. During this time, it earned the unfortunate moniker of “Felony Flats.” However, in recent years, the neighborhood has began its ascent back into prosperity. As the busy streets of Foster, Powell, and 82nd ave come up, so does this area. We’re excited to see how it develops into the future.

Residents of this area don’t have to travel far to get a taste of Southeast Portland culture. Since three major thoroughfares mark its borders, you can simply drive down one of them and find an assortment of shops, retailers, and restaurants. As Foster-Powell assimilates into the New Portland vibe, there is something of a “changing of the guard,” as older businesses are replaced with newer, shinier ones. So, you can expect to find a good mix of both on your journey. 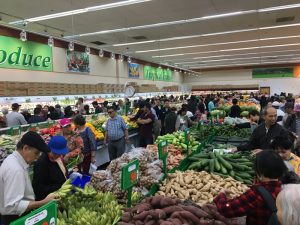 Since it’s grand opening in 2017, Emmert Cali has become more than just a grocery store. While the central part of the building is for food, there is a row of vendors along the outside, including a jewelry store, cosmetics stand, and tea shop. For many years, this location was a Fred Meyer, but with dwindling crowds, the store switched hands in 2016. The presence of the Saigon Mall is significant because it’s the first Asian market outside of “Little Saigon” to the North. It’s a sign of how times and demographics have changed in the area over the years.

Because of its unique location and impressive offerings, Emmert Cali is poised to become one of the top Asian markets in Portland. Because it’s both a mini-mall and grocery store, it entices visitors to hang out and stay awhile. It will be interesting to see how it grows in the coming years. 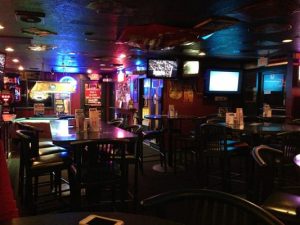 One interesting feature of the Foster-Powell neighborhood is its prevalence of neighborhood sports bars. Locations like Shamrock Bar, 82nd Ave Bar, Local 66 Bar, and others mean that the demand for affordable drinks and bar food is high. One of the oldest establishments, however, is the Bucket Brigade. This tavern has actually been around since the 1930s when it was called Green Shutters. However, that place was a victim of the decline of the neighborhood in the 70s and 80s. In 1985, new owners came in and called it the Bucket Brigade, as a nod to local firefighters.

You can catch most sports here, but the patrons do love to watch a UFC fight. On fight nights, the place can get packed pretty quickly, so plan accordingly. The food here is mostly standard bar fare, including mozzarella sticks, buckets of wings (and nachos), and some slick burgers. Notable highlights also include Bucket Brigade’s famous crispy gizzards, beer-battered mushrooms, and a proprietary Oreo crumble dessert. Everything here looks tasty, although vegans need not apply. The place also has bar games, including pool, dominoes, and darts. An enclosed outdoor patio is open all year long. 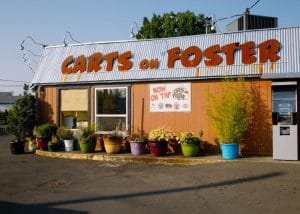 If you were in Portland during the late 2000s and early 2010s, you would have experienced the food cart craze. In a span of a few years, carts were popping up everywhere, and it seemed like every parking lot was getting in on the action. These days, the fervor has died down, but some of the “pods” still remain active and vibrant. One of the first and best is Carts on Foster, which offers a little taste of everything. Here you can grab a bite, get your nails done, and then chug some drinks.

Although the cart roster can change every so often, Carts on Foster has a varied selection, including fried fish, burgers, breakfast eats, BBQ, Chinese food, Hawaiian, and more. Be sure to come hungry so that you can sample as many carts as possible before your belt succumbs to the feast. Also, feel free to bring your friends to share in the spoils. 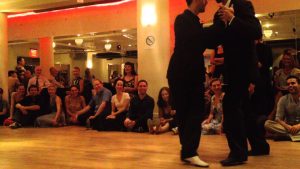 Care to dance? If you’re looking for a good time outside of the bar scene and you want to stay active, then we highly recommend learning to tango. This dance studio has been in the neighborhood for a while, but it’s seen a massive influx of students in recent years. Not only is the tango fun to learn, but it’s the perfect excuse to get close to your partner. If you don’t have one, that’s okay too – individuals can sign up as well as couples.

The beginner’s class is an excellent introduction to the basics of tango, and each class runs for four-week intervals. The instructor, Alex Krebs, offers intermediate and private lessons as well for those who want to hone their craft and get really good at dancing. Since the tango is perfect for couples, this could be a really awesome anniversary gift to spice up your relationship. After all, it takes two to tango. 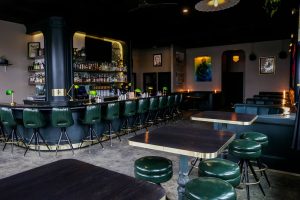 Most of the bars in the Foster-Powell neighborhood are local watering holes that attract old-timers and newbies alike. However, if you want a more refined drinking experience, might we suggest the Five and Dime Bar. This minimalist tavern is designed to help you feel classy while sipping on one of the bar’s many signature cocktails. Going a step further, most of these drinks are named after classic literature, including White Fang, The Crucible, and The Great Gatsby. The bar also has a decent beer and wine selection if you prefer.

The eats are just as refined as the cocktails, making the Five and Dime one of the better choices for a night on the town. Highlights from the menu include flank steak, bacon-wrapped prawns, pork and squash sliders, and pan-seared Brussel sprouts. Since this is Portland, the bar offers vegan and gluten-free options for those with dietary restrictions. Overall, the Five and Dime is a relaxed and comfortable place to unwind and share a beer with friends.

Because this neighborhood is still in transition, the vibe can change depending on where you go. Some areas still have the Old Portland feeling to it, which means the houses are a little more rundown. Other spots in Foster-Powell are newer and flashier, giving you a sense of what’s to come. Overall, the neighborhood vibe is mostly quiet on the inside and active on the outer edges. With an abundance of local bars and hangouts, it’s great for younger residents, although it does have its share of families as well.

The neighborhood is quickly getting developed, so there are a lot of new homes and condos in the area. Also, to capitalize on the rising demand, many homeowners are upgrading their properties to raise their selling price. Foster-Powell has a mix of cottage and bungalow-style homes, with plenty of multi-story units as well. There’s something for everyone here.