Rose City Park is a neighborhood in Northeast Portland. It is on the north side of I-84, and it is bordered by the Hollywood, Grant Park, Beaumont-Wilshire, Cully, Roseway, Madison South, and North Tabor neighborhoods. 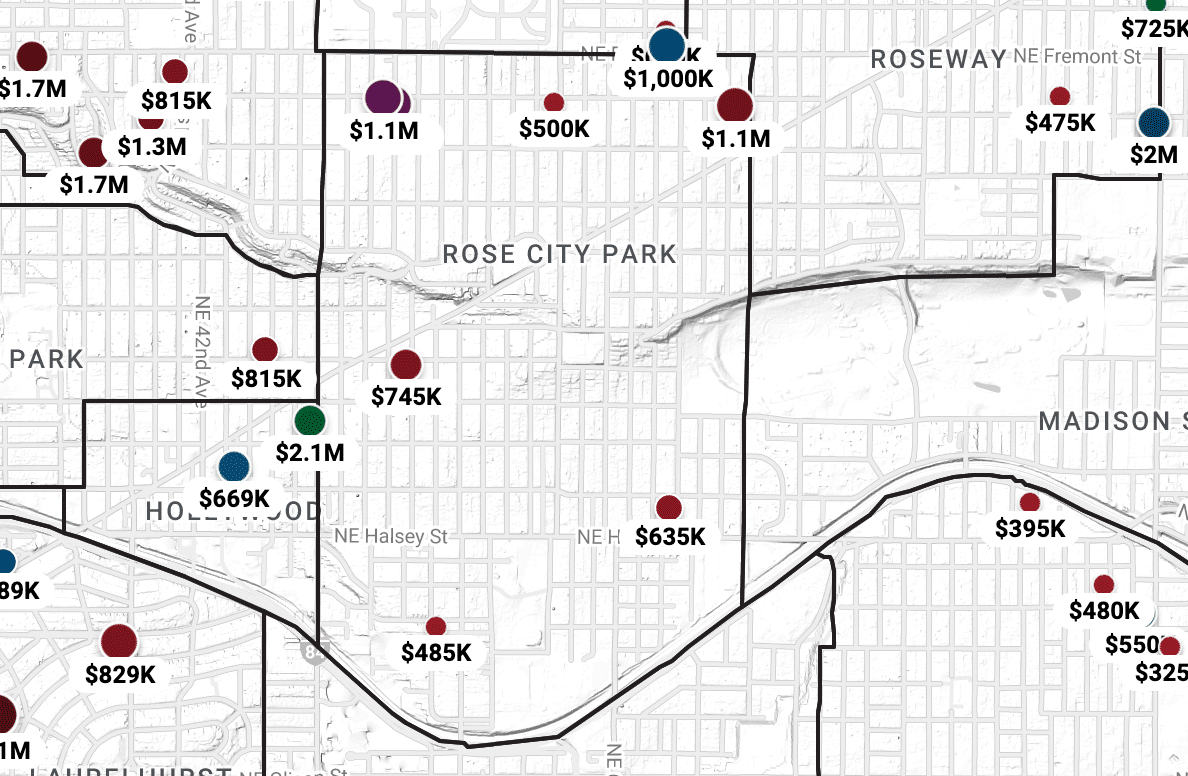 Click the image above for a searchable map of Rose City Park neighborhood, including all homes for sale.

As residents already know, Rose City is the unofficial name of Portland, which happened because of a push for residents to grow rose bushes in response to the less-savory moniker “stumptown” gaining steam.

In 1907, the city of Portland hosted the first annual Rose Festival, which has been going strong ever since. This was also the year that Rose City Park (the neighborhood) was incorporated.

Because of its abundance of food options, Rose City Park is certainly a hotspot for gourmands and foodies of all shapes and sizes. The neighborhood has two swank food cart pods, each complete with some world-class offerings.

Located on the corner of 52nd and Sandy Blvd., Rose City Food Park is right in the heart of the neighborhood. This pod has been around since the early days of the food cart craze, and while other pods have petered out in recent years, this one is still going strong.

There are 14 food options here, ranging from Chinese to breakfast specialties to world-class sushi rolls. The Food Park runs a beer garden during the warmer parts of the year, and the whole area is dog-friendly. Compared to some of the other food pods in Portland, Rose City Food Park is one of the most well-maintained.

Since Portlanders love nothing more than some delicious food and a nice, cold beer, the Barley Pod is another hotspot for Rose City Park residents. This pod is actually sponsored by Baerlic Brewing, and it is the site of the company’s event hall. Because of this, there is indoor seating and beer on tap all year long.

Perhaps because of the draw of the beer hall, some of Portland’s best food carts call this spot home. Some of the top eateries include La Arepa Venezuelan cuisine, Flew the Coop Fried Chicken Sandwiches, Yaba Yabaa Mediterranean food, and Suphatra Thai. It’s almost impossible to choose one when you visit.

Although this isn’t the largest neighborhood in Portland, it does have quite a few businesses and restaurants packed into a small area. Sandy Blvd is the primary hotspot for everything you need, although Fremont street to the North and Halsey street to the South also have a few gems. Whether you’re visiting Rose City Park or buying a home here, we highly recommend these options.

Fire on the Mountain

If you love chicken wings (and, be honest, who doesn’t?), then you’ll really love Fire on the Mountain. This restaurant is dedicated to all things wing and beer related, making it the perfect spot for Portlanders. This location is the largest of the three, and it has its own brewery and outdoor seating area.

This being Portland, FOTM serves both meat and meatless wings so that everyone can enjoy. Don’t worry about getting enough for the table – the wing counts go up to 250. Unless you’re feeding Smaug, you should have more than enough to go around.

The sauces are where FOTM really shines, with options like lime cilantro, spicy peanut, raspberry habanero, bourbon chipotle, whiskey pomegranate, and more. For non-wing lovers, the restaurant also offers salads, sandwiches, and pizza. But really, why come here for that?

Portland doesn’t have too many Hawaiian restaurants, but the ones it does have are all excellent. Rose City Park has the honor of hosting one of the top Hawaiian eateries around, which is both a restaurant and shave ice shop.

Ohana started in 2005, and has grown to a second location in Milwaukie. The place serves all kinds of Hawaiian favorites, from BBQ chicken, Huli chicken, beef short ribs, kalua pork, and more. Shaved ice is always a treat, so be sure to stop in for one, particularly on the hottest days of the year. Ohana is one of the best shaved ice spots off the islands, and you get more than enough to share.

If Portland is lacking in Hawaiian-style restaurants, it is really short on old-school steakhouses. Part of the reason these places are so few and far between is that the city caters mostly to vegans and trendy foodies. For those who want a taste of yesteryear, Clyde’s is the place to be. This restaurant has been around since 1955, and while the building has been updated, the atmosphere is still very classic and elegant.

As the name suggests, Clyde’s specializes mostly in prime rib, which is slow-roasted and extra juicy. However, if you want to sample some of Clyde’s other dishes, we won’t judge – they’re all delicious. Highlights from the menu include lobster mac n’ cheese, prime rib bites, a surf n turf platter complete with fresh Maine lobster, and one of the best fried chicken sandwiches you can find anywhere.

No matter which way you slice it, Clyde’s a cut above the rest (yes, puns were fully intended).

Typically, Korean restaurants in Portland are the barbecue-type, which means that they are as much of an experience as anything else. However, if you want a taste of Korean food without the pomp and circumstance, Du’s Grill is the perfect escape.

From the outside, Du’s doesn’t look like much, but the kitchen stays exceptionally busy all day long. The food is that excellent. Du’s menu is simple – they really only offer teriyaki plates. However, the combination of flavors is so delicious that they almost always sell out. In most cases, you have to order the chicken before 3 p.m. if you want a taste. But, don’t think that you’re “settling” for pork or beef – those are just as succulent.

Living in Rose City Park means that you’re never too far from a beer tap. One of the best places to knock back a few pints, however, is Laurelwood Public House. This is the restaurant arm of the Laurelwood Brewing Company, whose beer selection you can find throughout Oregon.

Since 2001, Laurelwood has been one of the top places to eat and drink with friends, becoming one of the most well-respected pubs in the city. While most groups come for the beer and food, they stay for the axe throwing. Didn’t you know that you could throw axes here? Well, now you do. This part is handled by the Celtic Axe Throwers company, and someone is always on hand to show you how to throw safely. You can also rent the space for parties if you’re trying to get really wild with it.

While most of the food options in Rose City Park are made for casual consumption, places like Cabezon are perfect for fine dining aficionados. This restaurant specializes in locally-sourced food, and prepares every dish to immaculate perfection. The intimate space is perfect for couples or groups, and they have a banquet room for events.

Highlights from the menu include basil and phyllo-wrapped white shrimp, lamb ragout (sourced from Washougal), duck and black eyed pea soup, and house-made pate. The presentation is as exceptional as the ingredients, which will only wet your appetite even further.

This area is very family and dog-friendly. Rose City Park has a nice mix of Old and New Portland vibes, thanks to its cluster of hip and trendy restaurants. While not as high-profile as other neighborhoods like Hollywood or Alberta Street, Rose City Park has a charm all its own.

Because this area isn’t as trendy as others in Northeast Portland, many of the home prices here are more than reasonable. Most of the properties are bungalow and single-story units, although there are some newer multi-story homes mixed in as well.